CPR With Pacemaker and Defibrillator

Is it possible to perform CPR on someone who has a pacemaker or implantable cardioverter-defibrillator, ICD? Yes! CPR should be done on a person with a pacemaker if need be. We recommend learning about the differences between a pacemaker and a defibrillator. If they are unconscious, it is possible that something is seriously wrong with their heart, or their pacemaker for that matter. AED devices may also be used to deliver defibrillation shocks to ICD patients who require extra support in reducing the risk of death.

Arrhythmia, including ventricular tachycardia and ventricular fibrillation, can be regulated with a pacemaker, however, it has no power over the heart’s systole. CPR leads to the heart operating again and gaining control over a normal heartbeat if it fails, which normally means something is wrong with the systolic functions.

When Should You Not Perform CPR?

We normally concentrate on when and how CPR should be administered when someone has a life-threatening or abnormal heart rhythm, but when should you stop CPR, or when is it not necessary on patients? CPR should be initiated as soon as possible and should not be done for more than three hours. There are four general requirements for determining when CPR should be stopped:

The Person is Dead

If a person with a pacemaker experiences sudden cardiac arrest, begin CPR or external defibrillation as soon as possible to give the victim the best chance of survival. Sudden cardiac arrest is not always apparent, which means you may find the victim unresponsive after an unexplained period of time. It is also conceivable that the deceased suffered from life-threatening injuries like traumatic brain damage. Therefore, when confronted with unresponsive patients, one must evaluate the situation to determine whether you need to deliver any treatments. Here are several warning signs to look out for:

The Person with a Pacemaker is Cold to the Touch

If you touch someone and they are incredibly cold, it is probable that they are beyond the point of being revived. However, the climate must be considered. Feeling the skin may offer false indications if a person is outside in cold weather or if they are a drowning patient.

This Latin phrase means the third stage of death. It is one of the recognizable symptoms of death, caused by chemical changes in the muscles postmortem, which causes the limbs of the body to stiffen.

Rigor mortis is an extremely late symptom of death. It’s too late to initiate treatment if you find a patient absolutely rigid with limbs that don’t move freely. In whatever shape a person with a pacemaker is in, they stiffen.

When a body starts to turn blue, this is a sign of livor mortis. It is caused by blood collecting on the skin and gradually penetrating it. It looks like bruises but covers a wide area of the body.

Lividity happens at a person’s center of gravity at all times and is a clear sign of death.

Severe Injuries that a Person Cannot Live With

These kinds of injuries are serious, and even the strongest efforts would be ineffective. Decapitation, torso amputations, and other amputations are examples of this. Some medical providers have procedures that prevent paramedics from performing treatment on major traumatic arrests.

A traumatic arrest occurs when a person experiences a traumatic injury, such as an amputation, that causes them to bleed excessively to the point where their heart stops beating. Since there is no blood to flow with compressions and no red blood cells to bring oxygen from rescue breaths, any clinical procedure would not be helpful.

Physical exhaustion makes it impossible to continue CPR. Unlike in the movies, CPR seldom brings anyone back to life with just a few compressions; it can take anything from 30 minutes to one and a half hours before a patient responds after suffering from sudden cardiac arrest. Longer resuscitation attempts, in reality, have been shown to enhance brain function in survivors. 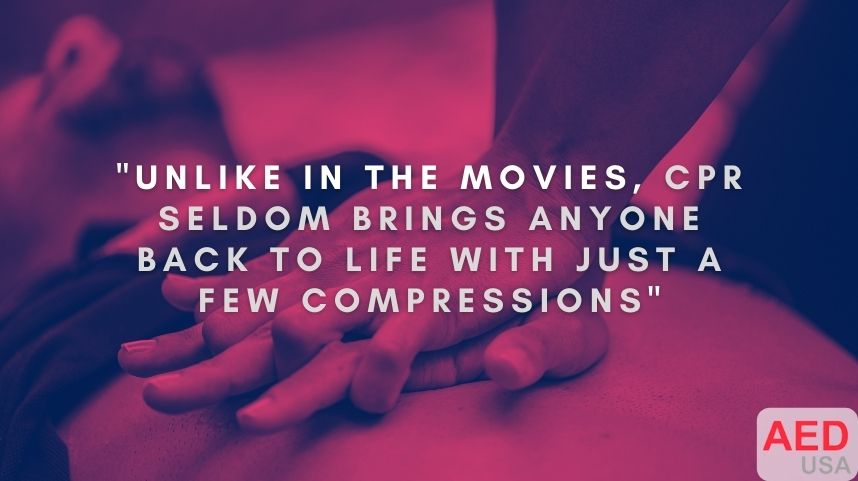 CPR is exhausting. After 15 minutes of CPR, a person burns 165 calories. However, according to the national American Heart Association, CPR performed for a full 38 minutes links to significant improvements in control of a normal heartbeat. In fact, because of the increased chance of resuscitation, the younger an individual is, the longer you should attempt CPR. However, if you are doing the procedure by yourself, you can only go for so long before being exhausted.

Guidelines do not recommend checking for a pulse every two minutes while CPR is done outside of specialized medical treatment. If you initiate the process, it should be continued without interruption for as long as possible before visible signs of life appear.

When it comes to knowing when to avoid CPR, there are a few main signs to watch for. The following are the main indicators to look for in a victim:

Finally, if advanced assistance arrives and takes over CPR, you can stop all activity. A trained first responder, such as a paramedic or a firefighter, is usually sufficient. If you are willing and able, they might ask you to keep doing compressions while they set up their equipment. You might even be asked to come to a halt so that they may take over immediately.

Advanced aid typically arrives at patients in a few minutes in urban areas. In rural areas, however, response times can take up to 30 minutes or more. There are several variables to consider before deciding when CPR should be stopped. In the vast majority of cases, you are never pressured to make that choice. With a few exceptions, you can generally expect the medical service to arrive and take over before you even consider stopping.

If you have never taken a CPR lesson, we recommend you do so now so that you are ready to respond in an emergency.

Can You Use an AED on Someone With a Pacemaker?

Yes, this follows all necessary safety measures. The upper left side of the chest is where you should implant a pacemaker and implantable cardioverter-defibrillator, ICD. Chest compressions are performed in the center of the chest during the process and do not interfere with a pacemaker or implantable cardioverter-defibrillator, ICD, that has been in operation for some time.

When using an automatic external defibrillator (AED), the pads placement is typically on the upper right side of the chest and on the side of the rib cage under the left arm, out of the way of pacemakers or ICDs.

While there is evidence that an implantable cardioverter-defibrillator is going to save your life in the event of sudden cardiac arrest, it cannot fully prevent it. When a sudden cardiac arrest is not caused by a fast and life-threatening heart rhythm or heart rate, the ICD does not produce an electrical shock; therefore, you should initiate CPR right away. Alternatively, an ICD device can produce one or more electrical shocks but may fail to restore a normal heart rhythm, which poses a greater risk.

If the individual is unconscious and not breathing, CPR should be administered immediately. The internal shock would not affect the person performing CPR if an ICD delivers an electrical shock while CPR is being performed.

A defibrillator should be used as soon as possible if one is available. It uses external pads to analyze the heart rhythm and heartbeat; if it senses that the heart has been returned to a normal rhythm by an ICD device, it is not going to produce a defibrillation shock. Defibrillators do not damage the ICDs. 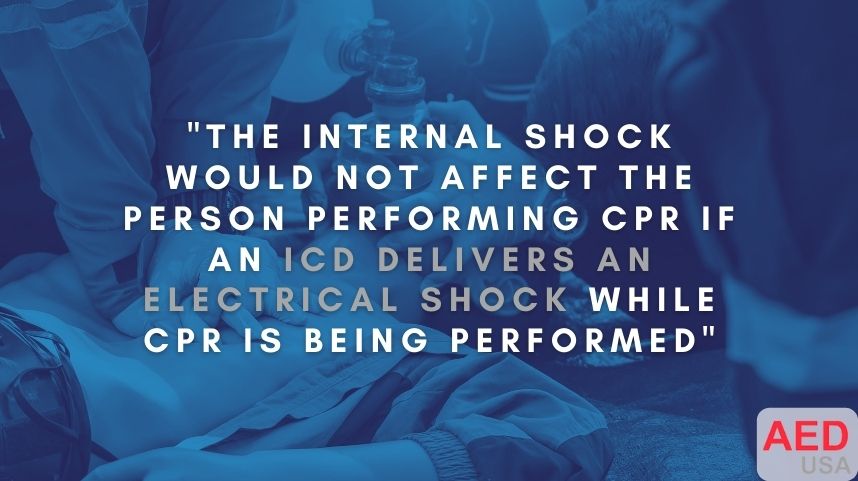 If you have had CPR or defibrillation, you can check your pacemaker or ICD devices to ensure the settings are still correct to provide the necessary support in case of an abnormal heart rhythm, ventricular tachycardia, or ventricular fibrillation.

How to Use an AED on Someone With a Pacemaker?

The AED pads should be a few inches away from a person’s pacemaker if they have one. Pacemakers can be seen just below the collarbone, just under the muscle and skin. ICDs have the appearance of a slight bulge under the surface of the skin. There is normally a scar from the implantation procedure if the pacemaker is not visible.

However, since modern devices are becoming smaller and smaller, you should not count on seeing if the patient has an implanted pacemaker. In the event of sudden cardiac arrest, some people wear a rubber band bracelet that states they have a pacemaker, which is an excellent way of sharing their health information.

To use an AED device on patients who have an implanted pacemaker, you must do the following:

How Long Should You Do CPR Before Using a Defibrillator?

When a person with a pacemaker stops breathing and their heartbeat stops, CPR should be performed as it maintains oxygenated blood circulating to the brain and heart before a defibrillator or an emergency response team arrives to restart the heart with sudden electrical shocks. CPR, if initiated as soon as possible after a cardiac arrest, has the ability to double or triple the victim’s chances of survival, thus reducing the risk of death.

Use the following method to deliver CPR on an unresponsive adult, child, or infant:

Call 911 right away and get access to an external defibrillation device. If you do not know how to do CPR, do not be discouraged: Over the phone, 911 operators are instructed to walk people through the steps.

Once you have dialed 911, begin CPR right away. Keep the CAB process in mind:

If one is available, use an automatic external defibrillator, AED to perform a shock to create a normal heart rate or heartbeat and reduce the risk of death. It should be attached to the victim and used as soon as possible. Follow the external defibrillation device’s directions carefully for it to function correctly. Most devices are programmed to guide you through the operation, or you can call 911 for help. Reduce the number of times you interrupt the compressions before and after each defibrillation electrical shock. After each shock, restart CPR, starting with compressions.

What to Avoid if You Have a Defibrillator?

ICDs and pacemakers last anywhere from five to seven years, depending on use and system type. With ICDs, patients can usually live a regular life.

Microwaves, for example, are less likely to mess with your AED device due to technical advances. Even so, if you have an implanted pacemaker or an ICD device, you must take some precautionary measures.

If you contain any reservations about the function of equipment or medicine near your implanted pacemaker or ICD devices, please contact your doctor or the system manufacturer.

What Is the Most Common Reason for Unsuccessful CPR?

This national care procedure may not always be successful when you deliver it to patients. If you want to deliver successful first aid:

Defibrillators could be used to deliver sudden electrical shocks to patients with ICDs, pacemakers, heart health, or cardiac issues; an AED device is still effective in helping these people when they suffer from arrhythmia, or ventricular fibrillation, ventricular tachycardia, or an abnormal heart rate or heartbeat. Whether dealing with adults or children, first aid services should be a primary concern when there is an issue with their beating heart. If you are a person with a pacemaker device, you could receive the necessary treatment services in times of need.

7 Ways to Prepare Your Home for an Emergency

What is The Purpose of Defibrillation?

Learn to Maintain Your Defibrillator Battery: What You Need to Know