Who invented the defibrillator?

There are many questions that people have about who invented the defibrillator. When was it invented? How did it work? And what is a defibrillator anyway? This blog post will answer all of those questions and more!

To fully understand who invented the defibrillator requires a little history of this life-saving medical device that uses an electrical shock to restore the heart rhythm of a sudden cardiac arrest victim.

What is Sudden Cardiac Arrest?

Sudden cardiac arrest is a deadly condition that can happen to anyone, at any time. In the U.S., it’s the leading cause of natural death and accounts for over 350,000 deaths each year. 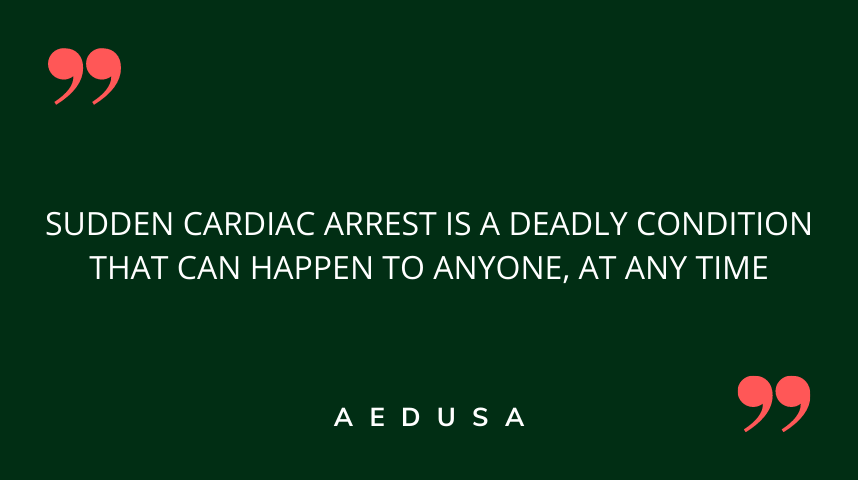 Most people who die from sudden cardiac arrest have no warning signs beforehand. They feel completely healthy one minute and then suddenly collapse. A victim of sudden cardiac arrest must receive CPR and defibrillation as quickly as possible. It is estimated that for every minute that passes before defibrillation, the probability of survival decreases by 10%. After 10 minutes, there is a very low chance of survival. It is imperative to administer cardiopulmonary resuscitation (CPR) to provide oxygen to the victim’s heart and brain. CPR can only work as long as the blood is circulating in the body, so defibrillation may also be necessary if a pulse does not return after three cycles of chest compressions.

What is a Defibrillator?

A defibrillator is a device that delivers an electric shock to the heart, which can be used in the emergency treatment of cardiac arrhythmia. A defibrillator works by applying an electrical impulse to the heart that alters its depolarization. The device’s components include electrodes, a current generator, and timing controls.

The first successful defibrillation was performed in 1947 by Dr. William Kouwenhoven as part of experimental research conducted under the direction of Willem Einthoven at Mount Sinai Hospital on dogs and pigs

The first modern defibrillator was created in 1947 by Dr. Paul Zoll, who invented this life-saving device while working as a medical resident at the Massachusetts General Hospital and Harvard Medical School.

In 1968, he went on to found Physio-Control Corporation with his brother Charles Zoll, which pioneered automated external defibrillation

The first closed-chest defibrillation was performed by Dr. William Kouwenhoven and James Jude at University Hospital on November 28th, 1950. 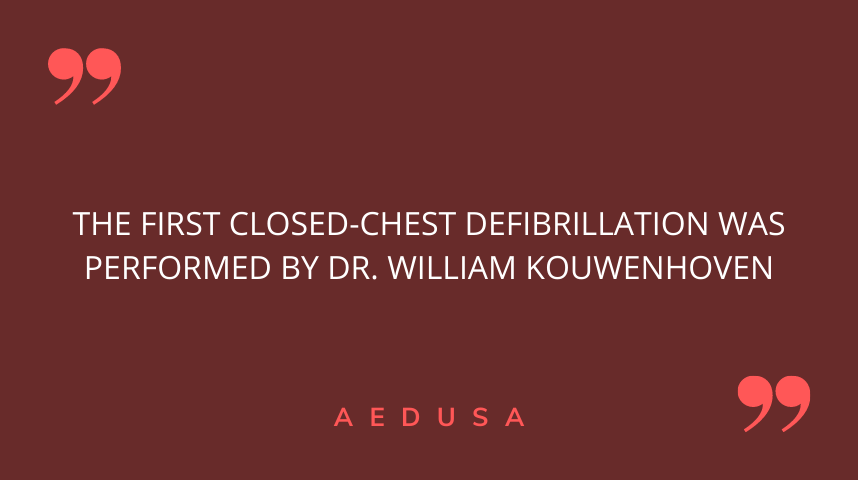 Defibrillation dates back to the late 1800s when Physiologists Jean-Louis Prevost and Frédéric Batelli at the University of Geneva, discovered that electric shocks could induce ventricular fibrillation in dogs. Ventricular fibrillation is a dangerous irregular heartbeat that can be fatal.  This occurs when the electrical signals that tell your heart muscle to pump cause your ventricles to quiver (fibrillate) instead. The quivering means that your blood is not pumping blood out throughout your body.

In 1933 Dr. Albert Hyman a heart specialist at the Beth Davis Hospital of New York City and C. Henry Hyman, an electrical engineer, invented the Hyman Otor. This device used a hollow steel needle designed to be inserted between the ribs and into the right auricle of the heart to deliver a shock through an insulated wire. Popular Mechanics magazine even wrote an article in 1933 titled “Self-Starter for Dead Man’s Heart” about the Hyman Otor.

William Bennett Kouwenhoven, a pioneer in understanding electricity and the heart, was born on 13 January 1886 in Brooklyn. His greatest achievement was the invention of the closed-chest electric cardiac defibrillator, which has been used to save thousands of lives since it was first used. In 1950, Kouwenhoven’s developed this life-saving technology for power companies to use in resuscitating workers who had been electrocuted in the field.

A major breakthrough was the introduction of portable defibrillators used out of the hospital in the 1950s. Oslovakia’s Gurvich Peleška developed the Prema defibrillator, which is more lightweight and portable than other models and was first pioneered in the Soviet Union. But Czechoslovakia’s Gurvich Peleška’s Prema model (designed for portability) became more popular in satellite countries like Poland than overseas. In the Soviet Union, a portable version of Gurvich’s defibrillator, model DPA-3, was first reported in 1959.

When was a defibrillator first successfully used on a patient?

A defibrillator was used in 1947 for the first successful human heart defibrillation by Dr. Claude Beck on a 14-year-old boy. The 14-year-old patient suffered from ventricular fibrillation and was undergoing an open-chest surgery when Dr. Beck restarted his heart successfully. Dr. Beck was also instrumental in developing Cardiopulmonary Resuscitation (CPR) techniques that we know and use today. 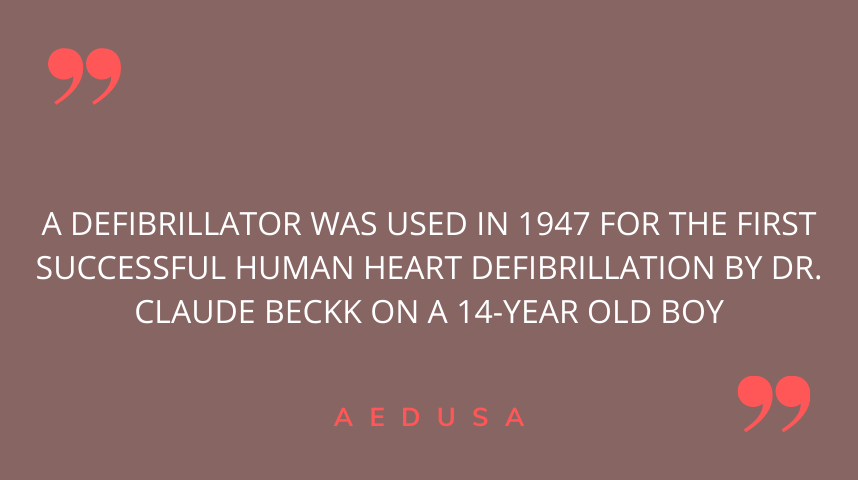 Before the end of the 1950s, defibrillation was successfully performed only on the heart with the chest cavity of the patient open during the surgery. A major technology achievement of defibrillation performed outside the operating room opened the doors to the modern automated external defibrillator (AED). In 1957 a closed-chest defibrillator was developed by John Lewis of the University College Hospital in London, England.

In 1963 the first portable resuscitator was invented and introduced to use by Dr. Frank Pantridge who made it available for all emergency responders such as police officers, firefighters, EMTs, and paramedics in his hometown in Ireland.

Who was the first person to use an automated external defibrillator? 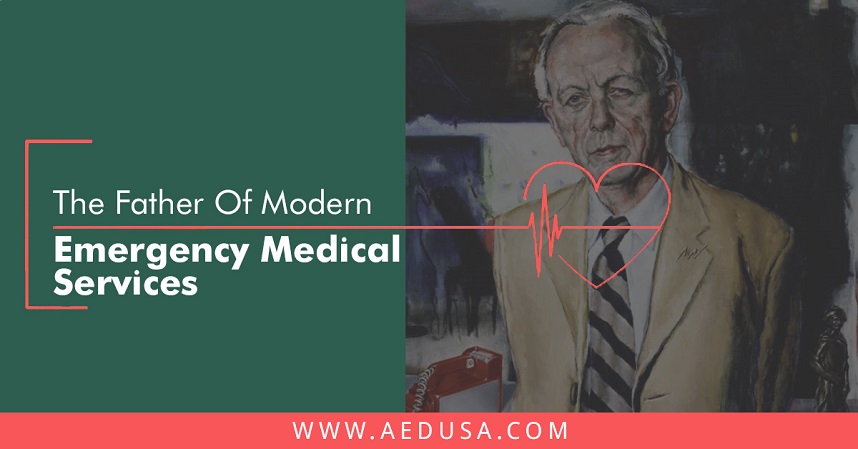 The mobile Pantridge Defibrillator was even used to treat US President Lyndon Johnson when he suffered a heart attack in Virginia in 1972.

Improved technology and smaller device sizes have resulted in the successful placement of more AED’s in businesses and in public spaces which have made it easier for those without medical training to provide life-saving care. It’s still a challenge to get more people to adopt AEDs. However, one of the most important challenges is access – it often takes too long for emergency responders to arrive at the scene and save someone who has had a cardiac arrest.

Here are some pertinent FAQs

Who invented the portable cardiac defibrillator?

Cardiac defibrillation was first invented by Frank Pantridge, a physician who was trained in the United Kingdom.

What is an AED?

An Automated External Defibrillator (AED) is a machine that will analyze someone’s heart rhythm and quickly defibrillate them when it detects ventricular fibrillation or other potentially life-threatening arrhythmias.

How did Frank Pantridge die?

How is Dr. Frank Pantridge remembered?

Dr. Frank Pantridge is fondly remembered for inventing the Automated External Defibrillator (AED) in 1957 and being a pioneer of defibrillation who devoted his life to saving lives with this device.”

Can You Use a Defibrillator on Someone with No Heartbeat?

Are There Any Defibrillator Shock Side Effects?

Different Types of Pacemakers and Implantable Defibrillators: What They Do and How They Will Affect Your Life