A diseased heart’s electrical system malfunctions most often during a cardiac arrest. Dysfunction of the right atrium results in an abnormal heart rhythm, which may be ventricular tachycardia or ventricular fibrillation. The abnormal slowing of the heart’s rhythm (bradycardia) can also induce cardiac arrest. Sudden Cardiac Arrest is often thought to be a heart attack but they are very different medical emergencies.

When is an Automated External Defibrillator AED needed?

SCA is one of the deadliest heart conditions that exist. You can improve the chances of survival with an immediate response that includes CPR, and early use of a defibrillator. Automated External Defibrillator AED, or also referred to as public access defibrillation devices are utilized to bring someone back from sudden cardiac death usually with voice prompts to guide even a novice user of an AED. Thankfully the amount of public access defibrillators has increased to be in many golf courses, sports arenas as well as schools, and any spaces where people gather. SCA to anyone at any time when an electrical problem causes the normal rhythm of the heart to be disrupted. This is known as ventricular tachycardia or ventricular fibrillation, which are both dangerous fast heartbeats (ventricular tachycardia) or fast and irregular heartbeat (ventricular fibrillation). A heart attack occurs when part of your heart muscle dies. If you have an irregular heart rhythm, the heart does not pump effectively and may even stop. 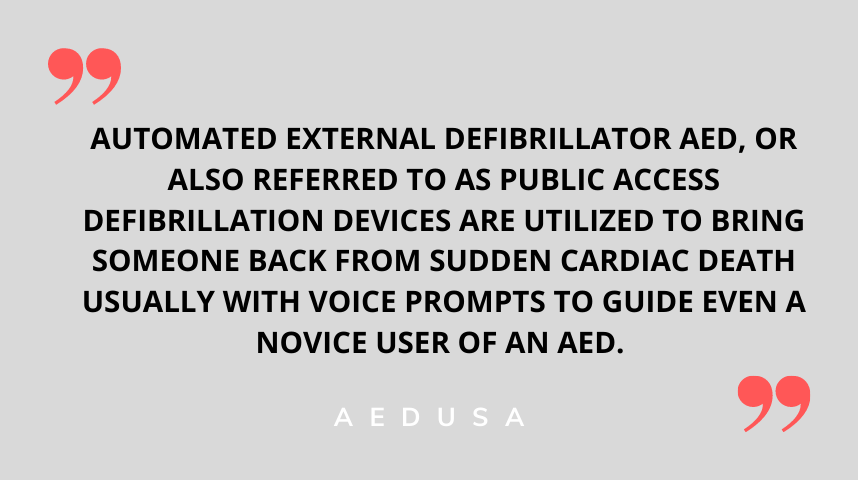 When you lose consciousness, your brain and other major organs don’t get the blood and oxygen they require, and if you don’t receive treatment right away, you can die. The sooner your heart’s regular rhythm is restored, the less damage you’ll sustain to your brain and other organs.

If you are suffering from ventricular fibrillation or ventricular tachycardia and an automated external defibrillator AED is available, a bystander in a public place or a family member can use it to shock your heart back into a normal rhythm and perhaps save your life.

Cardiopulmonary resuscitation (CPR) might help to keep blood flowing to your heart and brain for a while during cardiac arrest by administering chest compressions. Defibrillation by an AED, on the other hand, is capable of restoring the heart’s natural rhythm only occasionally. These therapies may enhance your chance of survival when used together.

Irregular heartbeats, if left untreated can lead to serious problems such as heart attacks and cardiac arrest.

Other causes of Cardiac Arrest include:

The five most common types of arrhythmias are characterized by the rate of a heartbeat they produce and where they begin in the heart and are: 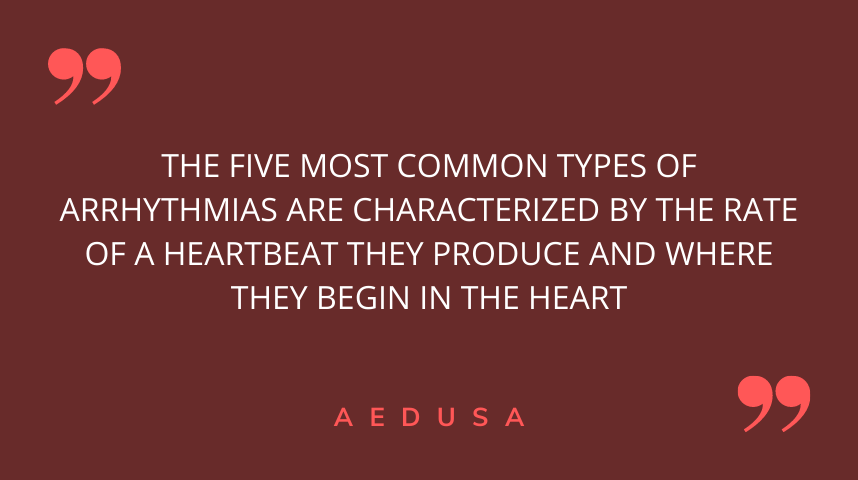 This fast heart rhythm causes a heart rate of more than 100 beats per minute.

This abnormality occurs when there is a slow heart rate, which does not produce enough blood to meet the body’s essential needs.

Bradycardia is a heart rate that is too slow. Bradycardia can be defined differently based on your age and physical condition. People who are elderly, for example, are more likely to have bradycardia. 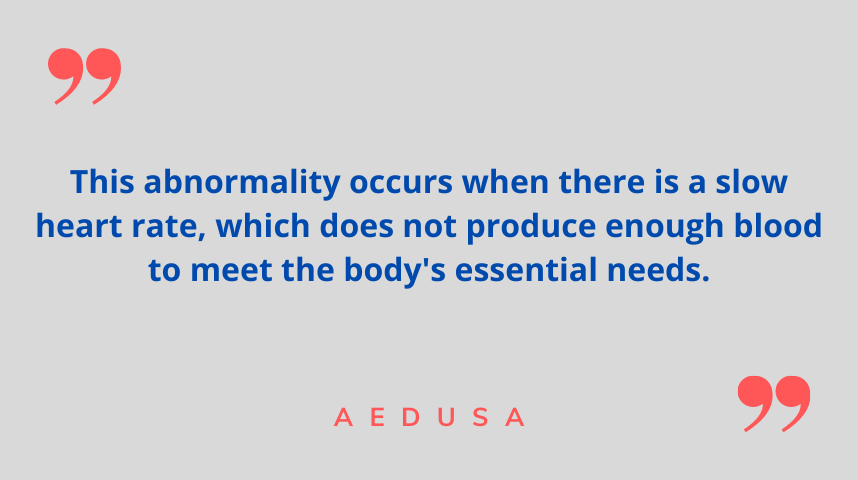 In general, a resting heart rate of less than 60 BPM (Bradycardia) is considered bradycardia in adults.

There are, however, certain cases. During deep sleep, your heart rate can fall below 60 BPM on rare occasions. A resting heart rate of 60 to 100 beats per minute is common in physically active people (and athletes).

Bradycardia is caused by a variety of factors, most commonly:

A fast, generally painless arrhythmia that seldom causes symptoms before it becomes critical is known as a beat. In most cases, people who have an uncommon extra beat are healthy enough to ignore it. A premature heartbeat, on the other hand, might cause an arrhythmia to develop. 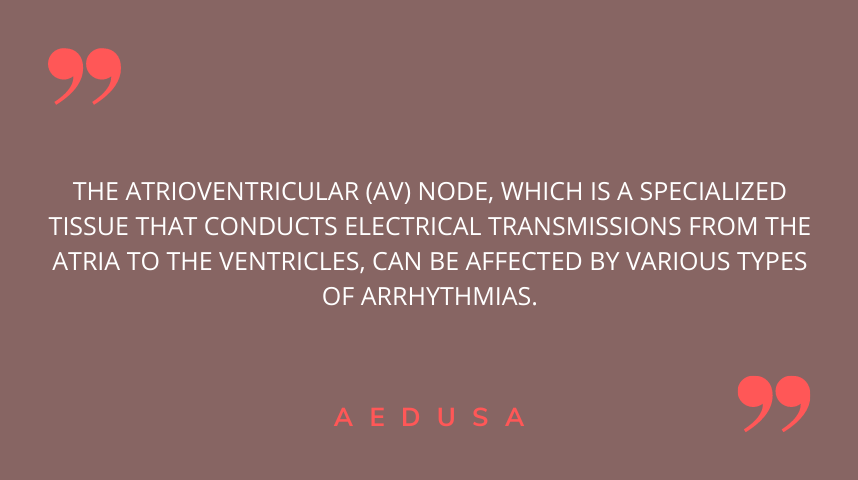 Tachycardias that begin in the lower chambers of the heart can be deadly and must be treated instantly by a doctor. The most common types of ventricular arrhythmias are:

VT is when a rapid heartbeat originates in the ventricles. If this condition isn’t treated immediately, it can lead to cardiac arrest and death.

It can cause sudden death without treatment since it prevents enough blood from V-Tach is the abbreviation for ventricular tachycardia. 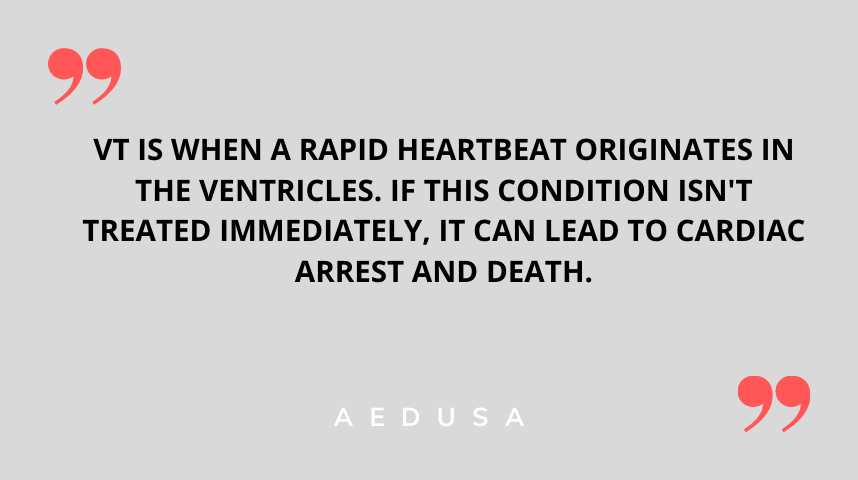 At rest, the human heart beats 60 to 100 times each minute. In ventricular tachycardia, the heart rate is generally greater than 100

The fast rhythms prevent the heart chambers from filling with blood equally. As a result, your heart may not be able to pump enough blood throughout your body

The ventricles beat very rapidly and chaotically in ventricular fibrillation. This makes it impossible for the heart to pump blood and results in cardiac arrest. 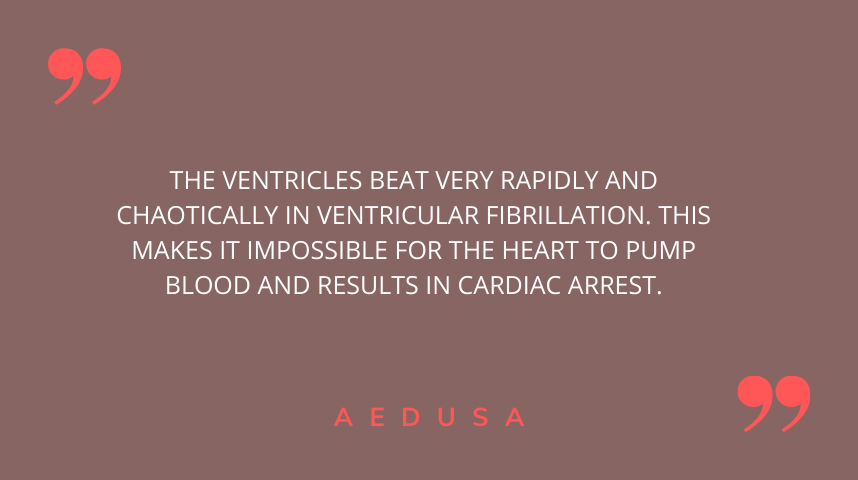 Ventricular fibrillation is an emergency that necessitates urgent medical intervention. It’s the leading cause of sudden cardiac death.

Cardiopulmonary resuscitation (CPR) as recommended by the American Heart Association and the American Red Cross uses an electric shock to the heart using an automated external defibrillator AED which is used in emergency treatment for ventricular fibrillation. Episodes of ventricular fibrillation can be prevented by taking medications, having devices, or undergoing surgery.

The most typical sign of ventricular fibrillation is a loss of consciousness and collapse.

Warning signs and symptoms of V-Fib

You might have symptoms or indications of an abnormally fast or erratic heart rhythm (arrhythmia) before experiencing a ventricular fibrillation episode. These warning indications may include:

Sudden cardiac arrest is when the heart suddenly stops beating and is one of the leading causes of death in North America. SCA occurs when electrical impulses that coordinate a person’s heartbeat become rapid or chaotic. While most cardiac arrests are caused by ventricular fibrillation (VF), they may also be caused by asystole and pulseless electric activity (PEA). 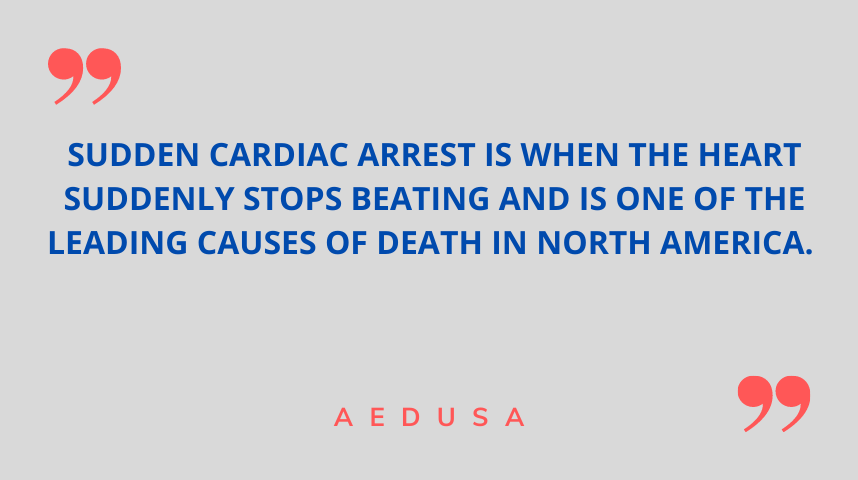 About 96% of VF cases result from coronary artery disease with about 70% due to left main coronary artery stenosis. Other diseases such as hypertension, diabetes mellitus, obesity, and hyperlipidemia can contribute to VF risk through various mechanisms including increased myocardial oxygen demand, reduced oxygen supply via atherosclerosis-linked plaques within epicardial blood vessels, and increased thrombosis risk.

A sudden cardiac arrest SCA is a medical emergency that requires immediate treatment to increase the chances of survival. If not treated within minutes, permanent brain damage or death can result due to anoxia (lack of oxygen). The American Heart Association estimates that approximately 387,000 cases occur in the United States each year.

VF is the most frequent rhythm in cardiac arrest, but it isn’t the only one. The AED is designed to treat VF (Ventricular Fibrillation) or VT (ventricular tachycardia), which is a very weak but fast heart rhythm. There are other heart rhythms associated with SCA that are not treated with defibrillation shocks. A “No Shock Advised” message does not mean that the victim’s heart rhythm is back to normal and many times an AED will recognize if the patient is suffering from some heart emergency other than SCA and the shock button will not be available if the device can not save the individual.

The use of defibrillation electrodes to treat a heart attack or other cardiac emergency is known as cardioversion. AEDs are used to restart someone’s heart to a normal rhythm when a heart abnormality causes a dangerously fast heartbeat (Ventricular Tachycardia) or a fast and irregular heartbeat (Ventricular Fibrillation). If your heart rhythm is abnormal, it does not pump effectively and may even cease to function.

Note that if an individual is suffering from Asystole which is often referred to as Flat Line, there is no electric activity in the heart and it is not pumping at all. Typically this can not be treated to shock the heart back into a normal rhythm because the heart has lost all rhythm.

If you’re experiencing ventricular fibrillation or ventricular tachycardia and an AED is available, a bystander in a public place

Following cardiac arrest, cardiopulmonary resuscitation (CPR) may help to keep blood flow to your heart and brain for a while until emergency services arrive as the American Red Cross recommends. There are several methods used to treat this condition, and unfortunately, only defibrillation has been shown to restore a normal rhythm in the heart but must be used in conjunction with defibrillation.

We hope this blog has been helpful in explaining the different arrhythmias that can be treated with an AED to save lives. If you know someone who is suffering from any of these heart conditions, please call 9-1-1 immediately or get them to the nearest hospital.

Does Your Arrhythmia Need Treatment?

Emergency Treatment Used to Restart a Heart in Cardiorespiratory Arrest

How To Maintain Heart Health Even in Hot Temperatures

How To Use A Defibrillator What Is It And Who Can It Help?