What is asystole and why should I worry about it?

What abnormal heart rhythm is characterized by no pulse and is known as “flatline?”Asystole is a form of lethal arrhythmia and is the absence of ventricular contractions. The term ‘asystole’ comes from Latin, meaning the complete lack of contraction. Asystole is an uncommon form of cardiac arrest and is usually irreversible. This blog post will help you understand more about this very serious form of cardiac arrest typically referred to as a Flat Line and the advanced cardiac life support needed to increase the survival rates.

Myth: Shocking someone who has asystole will restart their heart.

You’re watching your favorite emergency medicine or ER-based television show and the patient suddenly flatlines with in-hospital cardiac arrest. The heart monitor goes flat with a loud alarm sounding creating high drama. The doctor rushes in and says, “Hand me the paddles; we’re losing him!” This machine is charged and the cardiac arrest patient was finally shocked back to life with a successful resuscitation!

The problem is that, in real life, the rhythm on a test monitor that’s showing only asystole would show no change if you administered another shock due to no discernible electrical activity in the heart

What does asystole mean? You hear the word flatline in medical and ER sitcoms but what is it really. An Asystole definition is the state of total cessation of electrical activity from the heart in the human body. It’s a type of cardiac arrest where no tissue contraction from the heart muscle occurs, so there’s no blood flow to the rest of the body, and requires emergency cardiovascular care. Brittle, erratic heartbeats may produce sudden episodes of asystole that are indistinguishable from pauses in the electrical signal generated by the heart. Some common misspellings of Asystole are asytole and asystile. 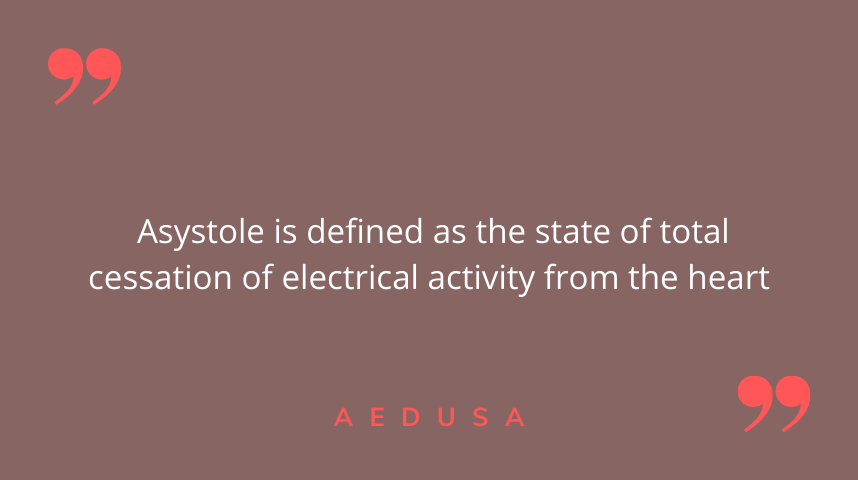 Asystole is a very brief pause in the heartbeat and should not be confused with other types of less severe abnormal rhythms such as ventricular tachycardia or supraventricular tachycardia (SVT). It is a flatline EKG, P Waves and QRS complexes are not present, the heart is not functioning. This medical emergency is different from but related to ventricular fibrillation, which actually has a better prognosis if it’s treated early. Asystolic patients usually present with a very poor prognosis. The prognosis in asystole depends on the etiology of the asystolic rhythm, the timing of interventions, and the success or failure of advanced cardiac life support.

Other problems that may lead to asystole include Hypoxia – low oxygen Hypovolemia – low amount of in your body Hyperkalemia- too much potassium Nutrition disorders, such as ketosis or hypoglycemia Hydrogen ion (acidosis) – excess acidification Tension pneumothorax- air buildup in the lungs Thrombosis- blood clots.

Asystole is typically referred to as a “flatline” and is a state of a cardiac standstill with no cardiac output and no ventricular depolarization. It is indicated by a lack of contraction and expansion of the heart. A diagnosis can be confirmed by checking for electronically transmitted pulses instead of counting one’s own pulse. 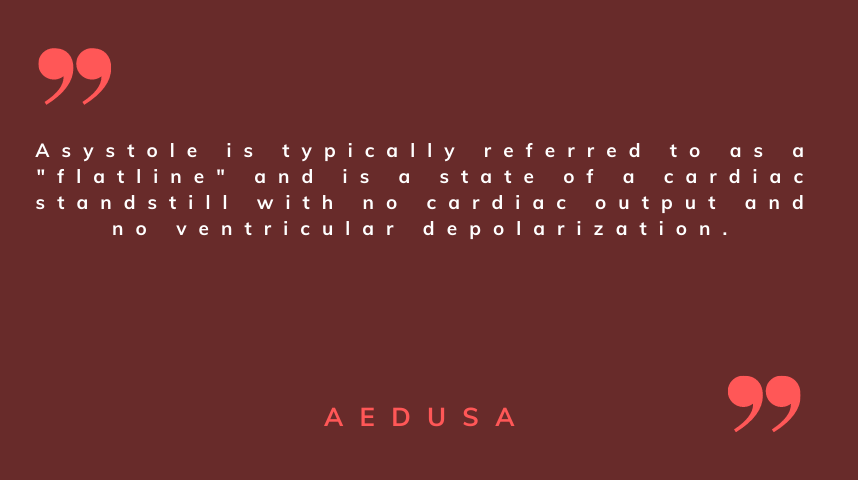 Specific common things to look for that caused masked indication of Asystole Rhythm:

The prognosis in asystole, or an irregular heart rate, depends on the etiology of the rhythm and whether interventions give positive results.

Asystole is treated by CPR combined with an intravenous vasopressor like epinephrine. Some underlying reversible causes, or “Hs and Ts,” can be detected and treated. Nearly all of the interventions that were previously recommended—such as defibrillation and intravenous atropine—are no longer in routine use by the major international bodies.

Patients with asystole have a much lower survival rate and are not “shockable” by defibrillation. Even when a person who suffers from asystole is converted to a less severe rhythm that can be treated with CPR and cardiac drugs, discharge from the hospital is not always possible. Less than 2% of patients survive out-of-hospital cardiac arrest even if they get emergency intervention.

SCA is when your heart suddenly and unexpectedly stops beating or asystole as the result of underlying cardiac arrhythmia. The most common cause of SCA is myocardial infarction (heart attack) when a portion of the heart muscle dies because it isn’t getting enough blood. The American Heart Association has simplified its basic life support cardiac arrest algorithm to encourage minimal compression interruption. The current algorithm eliminates the “look, listen, and feel” step to check for breathing and an emphasis is placed on “gasping” or agonal breathing as a sign of life. With the asystolic arrest, it is unknown whether they are asystole or PEA (pulseless electrical activity). 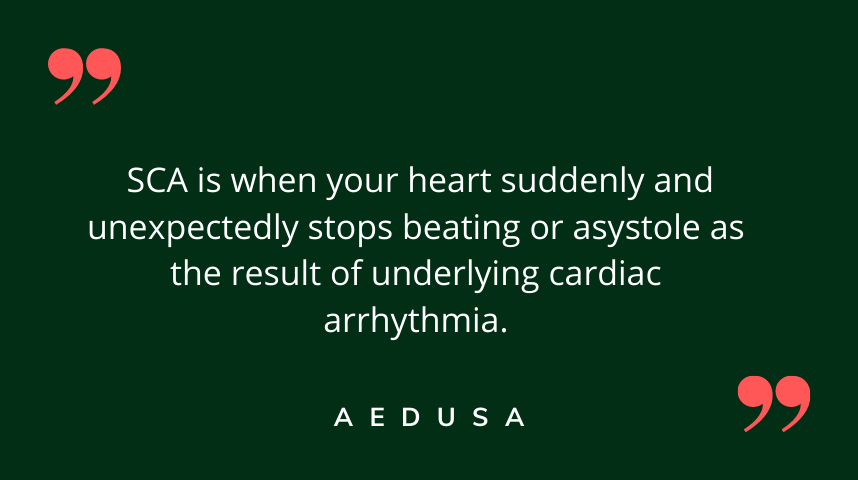 Asystoles can be broken down into two main treatment categories: asystole and bradycardia. If asystole or bradycardia is caused by a life-threatening cardiac emergency and/or asystole due to drug overdose, immediate treatment depends on the location of the patient (home vs. hospital). The preferred method for asystolic patients in an out-of-hospital setting is high-quality cardiopulmonary resuscitation with minimal interruptions in chest compressions.

V-Fib is when the ventricles of your heart start contracting very rapidly and irregularly. The atria as well as the ventricles contract, but as a result of this rapid and chaotic fiber contraction, there is not enough time to fill with blood as it would normally happen during normal sinus rhythm (NSR). The rapid, uncontrolled beating causes the chambers to quiver instead of pump properly. As a result, you may suffer from palpitations, lightheadedness, or dizziness. V-Fib can be deadly if left untreated as vital organs like your brain will not get enough oxygenated blood delivered to them which results in loss of consciousness within 10 seconds. This condition often leads to cardiac arrest unless treated immediately. 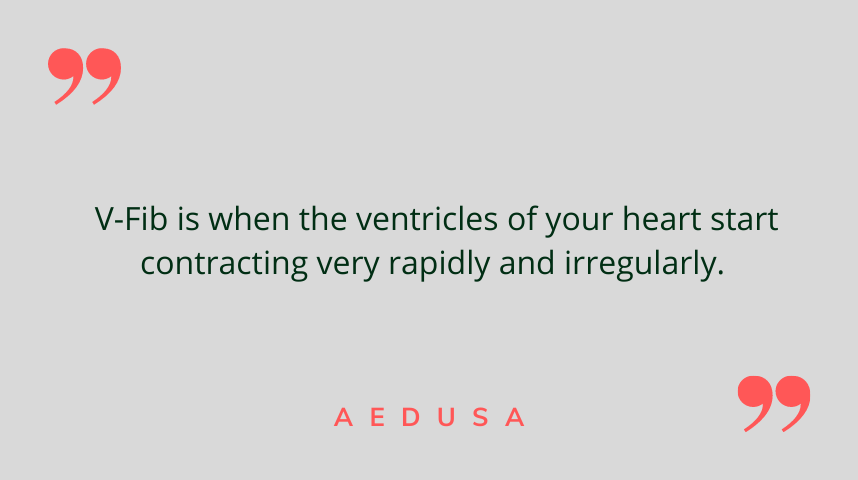 If we look at asystole and how it relates to SCA we must understand asystole as the severe end of the spectrum. It is also known as asystolic cardiac arrest but for purposes of this discussion, asystole will refer to cardiac arrest from asystolic rhythms only. The heart can go into asystole for a number of reasons ranging from direct injury to being subjected to life-threatening arrhythmias such as ventricular fibrillation or torsades de pointes which are discussed in detail later in this article.

As with many other medical conditions, there is an extensive list of potential causes and risk factors that would increase your chances of becoming systolic including:

One of the larger studies, as it related to SCA, came from Europe published in 2011 and was completed by European Resuscitation Council (ERC), American Heart Association, and Resuscitation council for Australia (2010). It looked at over 2500 case scenarios as well as a meta-analysis which included 34 different studies with data encompassing almost 57000 patients that had suffered SCA from asystolic heart rhythms. The overall statistics show that asystole is more common in older patients and that the overall survival rate of those who suffer from cardiac arrest with asystolic heart rhythms is dismal at less than 2% (1).

As is indicated by this data, shock therapy— whether it be defibrillation or medication such as epinephrine—is not recommended. In fact, if an individual does have a pulse there is no need to apply any kind of life-saving medications including anything that may accelerate the heart to try to bring the blood pressure back up. This was very much thought of as standard practice prior to 2010.

Performing immediate high-quality CPR is critical with asystole because asystolic arrested patients have no blood flow to their vital organs, they will become unconscious after only 10 seconds. CPR as well as other life-saving tools like an AED (Automated External Defibrillator) may be the difference between losing a loved one and making it through this difficult and emotional time in your life. 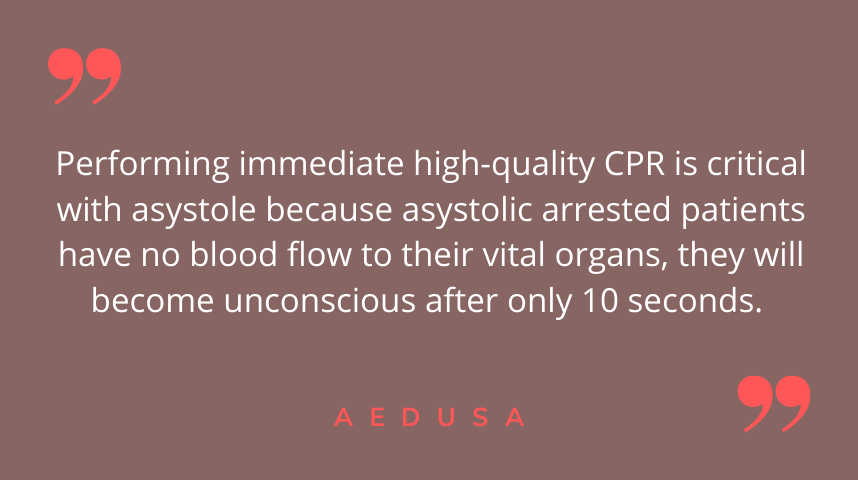 As mentioned previously asystole is on the more severe end of the cardiac arrest spectrum as far as its prognosis goes. Most individuals who suffer asystolic heart rhythms either die or suffer brain damage within about 5 minutes of being admitted to a hospital with sudden cardiac arrest from asystole due to lack of oxygen reaching their brain.

– What is asystole and why should I worry about it?

– Asystole: The mild end of the spectrum.

-What’s asystolic cardiac arrest like as opposed to ventricular fibrillation?

What is asystole and why should I worry about it?

Different Types of Pacemakers and Implantable Defibrillators: What They Do and How They Will Affect Your Life

Side effects of pacemakers and defibrillators

What are the dangers of a defibrillator?