The Importance of Defibrillation and CPR in Resuscitation

There is a common misconception that Defibrillation and CPR are competing lifesaving techniques. Defibrillators provide an electric shock to the heart, while CPR provides chest compressions and oxygen to the body. Defibrillator vs CPR is not a competition rather they should be used together for resuscitation. In this blog post, we discuss why Defibrillation and CPR need to be combined when attempting to save the victim of sudden cardiac arrest.

Sudden cardiac arrest is one of the leading causes of death in the United States. Defining sudden cardiac arrest is difficult because it can be caused by any number of different factors such as a heart attack, aneurysm, or stroke. It occurs when there are sudden periods without blood flow to the brain and other vital organs due to changes in electrical activity from within the heart itself. The American Heart Association estimates that around 350,000 people suffer from sudden cardiac arrest each year in the US with a survival rate of less than 15%. The American Red Cross emphasizes that Defibrillation and CPR need to be used in unison when attempting resuscitation. Survival rates can be greatly improved by having access to more public access AED’s. 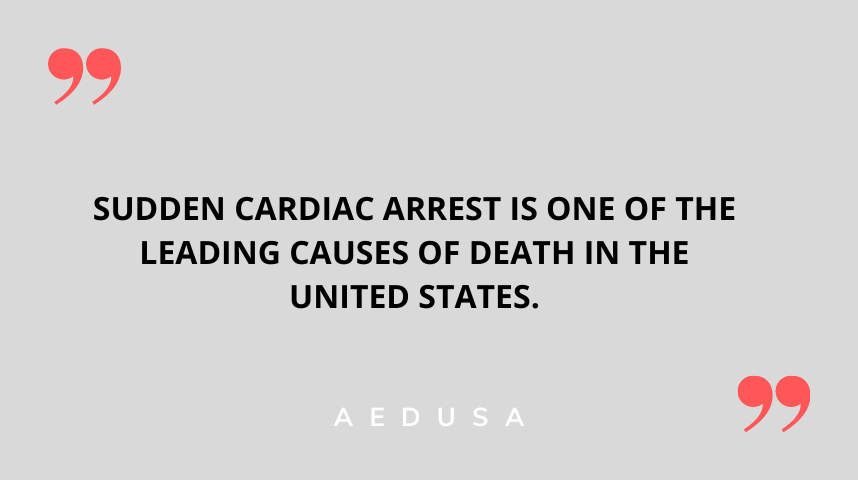 What is Ventricular Defibrillation?

Ventricular fibrillation (VF) is a life-threatening heart rhythm that starts in the lower chambers of the heart and can be triggered by sudden cardiac arrest.

Because a person experiencing ventricular fibrillation is likely to become unconscious and have low blood pressure, they should be shocked with an external defibrillator as soon as possible.

Immediate emergency care for cardiac arrest includes defibrillation with an automated external defibrillator (AED), and CPR performed by bystander responders. Long-term management of congestive heart failure is achieved through implantable devices as well as medications taken by the patient.

In order for Defibrillation to have a significant impact on the survival of sudden cardiac arrest, there needs to be an electrical shock delivered within four minutes after the pulseless victim’s collapse (without any intervention). To provide a victim with the best chance at surviving, Defibrillation and CPR should be used in conjunction with one another. Defibrillators can help to restore normal heart rhythm by delivering an electric shock, while chest compressions (CPR) must continue if any blood flow is restored to restart circulation around the body. Without Defibrillation or CPR alone then it will not be able to save the victim from sudden cardiac arrest because they both play such an important role in resuscitating someone who has suddenly gone into cardiac arrest. 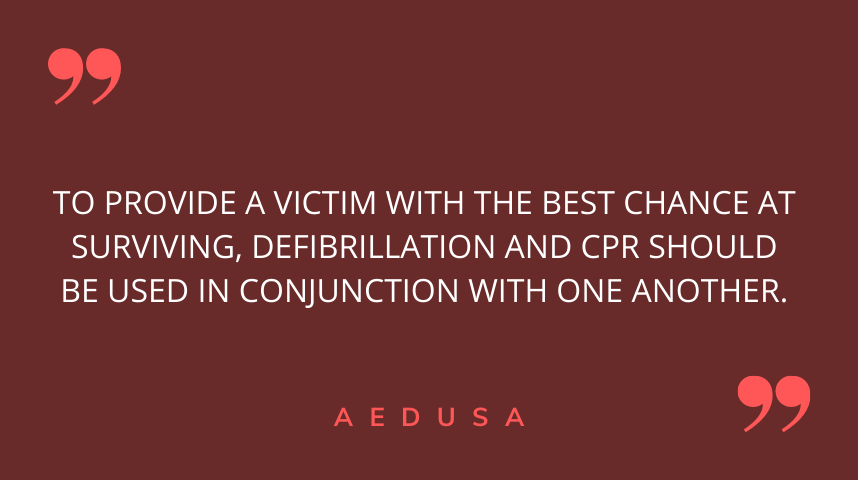 One misconception about CPR vs Defibrillation is that they are competing techniques; one replaces another while trying to save someone experiencing sudden cardiac arrest. This could not be further from the truth because both Defibrillation and CPR need to be used together for resuscitation purposes when done correctly. They should never replace each other; instead, you want them working hand-in-hand as a team!

The two techniques are an excellent combination because both provide life-saving capabilities in different ways: one provides oxygen while the other restores a healthy heartbeat to try and prevent brain damage to the SCA victim. Studies have shown that the use of early defibrillation and immediate CPR greatly increases the chances of survival. 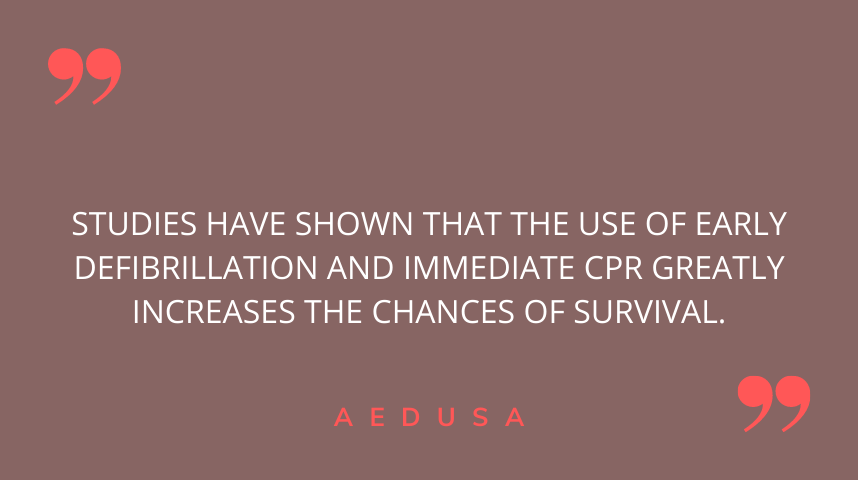 CPR is a lifesaving technique and the most fundamental component of emergency care that can be given to a person suffering from sudden cardiac arrest. CPR is performed by pushing on someone’s chest while breathing into their lungs in order to manually pump blood throughout the body until paramedics arrive. This assisted pumping of blood throughout the body is often the difference between recovery with no brain damage and death. Defibrillation, or an electric shock, may also need to be administered with CPR if needed because it helps restore a normal heart rhythm back into place so that blood flow through the body will resume properly. 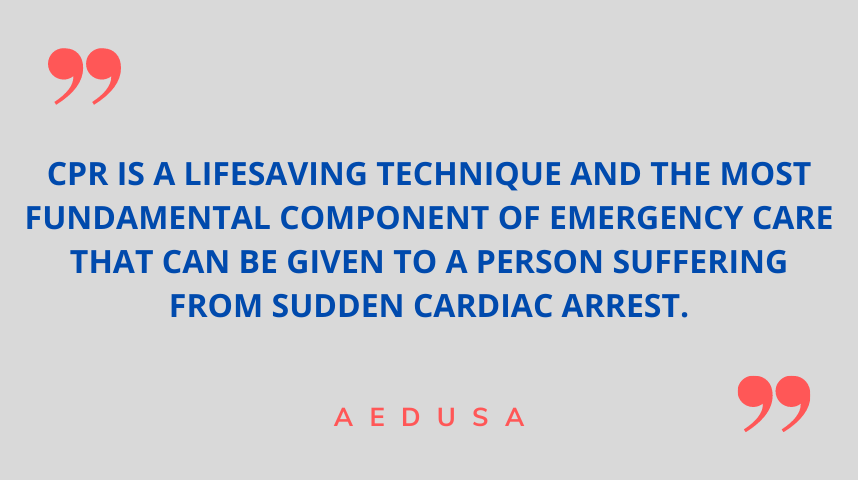 A defibrillator which is often referred to as an AED for Automated External Defibrillator is a device that can deliver an electric shock to help stop irregular, chaotic electrical activity in the heart and return it back to its normal pattern so that blood flow throughout the body will resume properly. Defibrillators are often used on people who have suffered sudden cardiac arrest or for those going through a cardiac event such as Bradycardia (slow heartbeat) 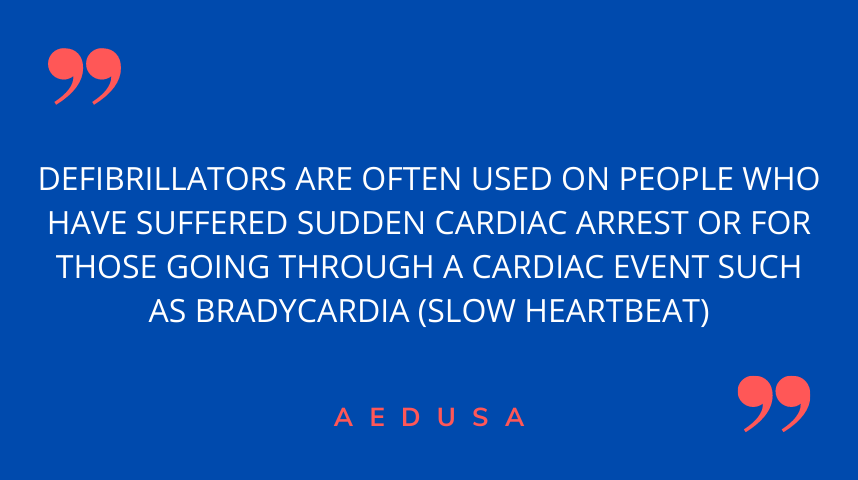 It is helpful to understand that CPR provides life-saving oxygen to the body while either reviving the SCA victim or emergency help can arrive and defibrillation attempts to shock the heart back into a normal rhythm so CPR is not needed. The chest compressions force the heart to continue to pump some blood through the body providing oxygen to the brain, heart, and other vital organs. Defibrillation has many uses, but it is primarily for when CPR alone doesn’t work. Defibrillators can help get a person out of sudden cardiac arrest by restoring their normal rhythm so that they will start breathing again and blood flow starts up once more through the body’s vital organs.

Is a Defibrillator better than CPR?

No not at all, a defibrillator is designed to get the heart pumping with a normal rhythm. CPR only serves the purpose of forcing the heart to pump some blood and therefore oxygen to vital organs during resuscitation attempts. Both are absolutely needed for reviving a victim from SCA.

The common misconception is that Defibrillation and CPR are competing lifesaving techniques. This couldn’t be farther from the truth! In fact, they should be used together for resuscitation as these two methods work in tandem to ensure the survival of victims stricken with sudden cardiac arrest.

Defibrillator vs Pacemaker – What are the Differences

Are There Any Defibrillator Shock Side Effects?