A wearable cardioverter defibrillator (WCD) is a lightweight defibrillator garment used to save lives and decrease the overall mortality rate of SCA victims. The Wearable Cardioverter Defibrillator Use non-invasive because the device is worn against the body and not surgically implanted to prevent sudden death from cardiac conditions by applying an electric shock to those at risk of SCA.

Wearable cardioverter defibrillators, which includes highly sensitive vests that can administer a treatment shock when the heart rhythm is out of sync or suffering from lethal arrhythmia, are intended to provide medical care around the clock for individuals who have had a heart attack and are at higher risk of dying from arrhythmia. These amazing defibrillator devices can restore a heart to a normal rhythm without intervention by the wearer of the device or any other person and have saved tens of thousands of individuals.

Wearable Cardioverter Defibrillator used for defibrillation to treat cardiomyopathy and heart failure with individuals of all ages, including after bypass surgery or stent placement, and with individuals who have had a heart attack.

Implantable cardioverter-defibrillator (ICD) devices are implanted under the patient’s skin, but a wearable cardioverter defibrillator (WCD) is worn directly against the skin to protect patients of SCA. It is lightweight and easy to wear, allowing patients to often return to daily activities with peace of mind knowing that they have protection from the risk of sudden cardiac death (SCD).

The wearable cardioverter defibrillator is designed to detect certain life-threatening rapid heart rhythms and automatically deliver a treatment shock to save and protect patients of SCA. This equipment worn beneath clothing monitors heart rhythms and automatically delivers treatment shocks if SCA is recognized. The monitor is worn around the waist or from a shoulder strap and monitors for arrhythmias. The most crucial element in effectively treating an SCA victim is timely defibrillation. Treatment shocks must be given within a few minutes of onset to be effective; with each passing minute, the chance of survival decreases by 10%. The WCD does not need bystanders to assist and has a 98 percent chance of successfully restarting people from SCA and is highly effective in treating sinus rhythm with victims of ventricular tachyarrhythmia.

SCA is a leading cause of death in the United States, killing more than 325,000 adults annually. SCA most often occurs among people who have underlying heart disease and/or those with a family history of SCD.

Of those who experience an SCA, 90 percent die before they reach the hospital; only about 10 percent will survive to be discharged from the hospital after surviving an initial cardiac arrest (ACA). The risk of dying increases significantly each minute that passes between collapse and return of spontaneous circulation (ROSC). 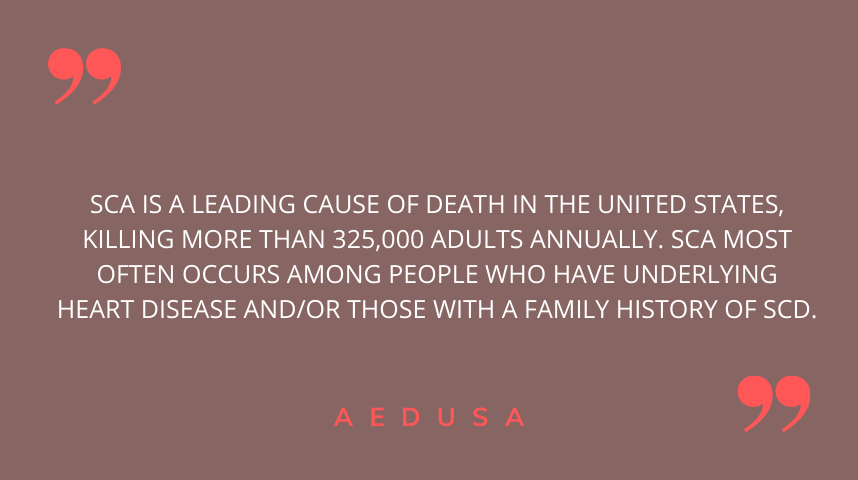 People at higher risk for SCA or ACA include:

Defibrillator devices and their increased availability does have a dramatic effect on increasing the probability of survival from ventricular fibrillation, atrial fibrillation, and arrhythmic death.

Interventional Cardiology is the branch of medicine that deals with structural problems, including congenital defects and diseases of the coronary arteries. In 1980, a landmark study showed that many patients who had survived a heart attack were at high risk for sudden cardiac death from lethal arrhythmias. 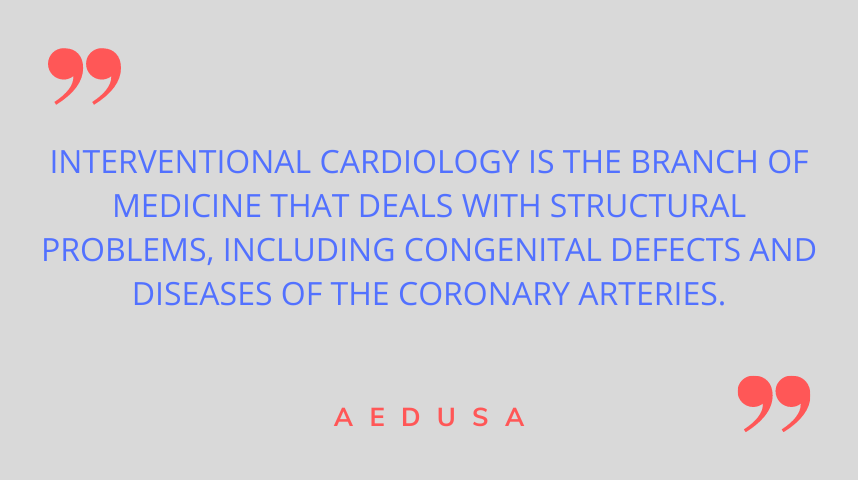 This discovery led to implantable cardioverter defibrillators (ICDs), which are now standard therapy for patients at risk for SCD. ICDs are small, battery-operated devices that are implanted under the skin in the chest area. They continuously monitor the heart rhythm and deliver electrical shocks to restore a normal heart rhythm if an arrhythmia is detected.

However, not all patients are candidates for ICD implantation for several reasons. For example, some individuals are poor candidates due to the potential complications of surgery at their age or other health issues.

A person’s abnormal heart rhythm is often temporary; therefore, an ICD might be unnecessary in the long term. These patients may derive benefit from wearing a WCD to protect them if they are at risk of sudden cardiac death.

A study at the Ochsner Medical Center found that the lifevest WCD lowers sudden cardiac death, but only when the device is worn. The study found that many patients in the study did not wear the device at all times and thereby affecting the overall results. For individuals that wore the device, the success was substantial in mitigating abnormal heart rhythms. 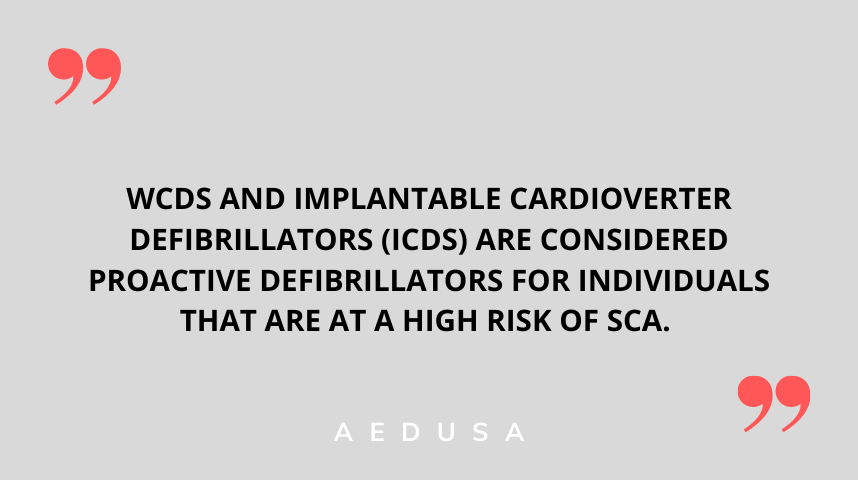 Automated External Defibrillators are reactive because they are only deployed if an individual is suffering from a suspected SCA and have saved tens of thousands of SCA victims.

What is unique with both an internal cardiac device (ICD) and a WCD is that both devices perform life-saving defibrillation without the assistance of any other individual.

All AEDs require an individual to perform life-saving compressions and apply defibrillation to the suspected SCA victim through defibrillator pads.

The Zoll lifevest made by Zoll Medical Corporation are WCDs that follow ECG signals and administer a treatment shock if the cardiac arrhythmia is detected and went through the FDA approval process.

The Zoll LifeVest is also a vital part of the AdvancedCardioLife system, which includes an accelerometer, motion sensor, and heart rate monitor. It also has voice instructions for the patient. The LifeVest is lightweight and simple to use, making it ideal for regular activities. 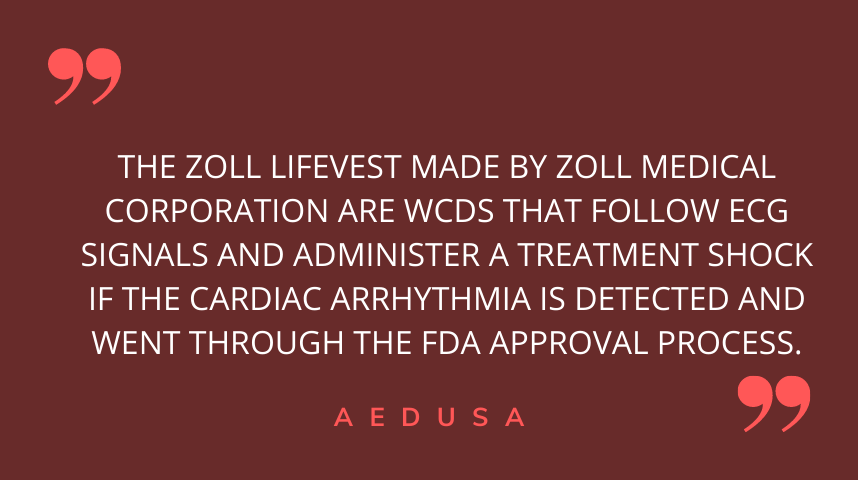 The Vest Preventing Early Sudden Death Trial (VEST) was a medical study conducted by the National Institutes of Health (NIH), and the University of Michigan in collaboration with Zoll Medical Corp.

Participants were instructed to wear the vest at all times, with the exception of baths. Patients in the WCD arm of the study, on average, wore the device for 14.1 hours each day over 90 days, beginning at 18 hours and declining to 12 hours by day 90 when only half of the study participants were still wearing it.

Who qualifies for a LifeVest?

A LifeVest made by the Zoll Medical Corporation is typically worn by patients who have a history of cardiovascular disease, or those with hypertrophic cardiomyopathy.

Patients with a history of a prior heart attack, heart failure, coronary artery bypass surgery, and those who have had stents placed are also included in the patient pool for this technology.

Patients with implanted cardiac devices such as pacemakers and defibrillators are not candidates for a WCD because the device may interfere with the functionality of the implanted device.

How long does a person have to wear a LifeVest?

A LifeVest is typically worn for a period of time ranging from a few months to several years. The time is determined by the patient’s physician and is dependent on factors such as the reason for its use, overall health status, and any potential liabilities. 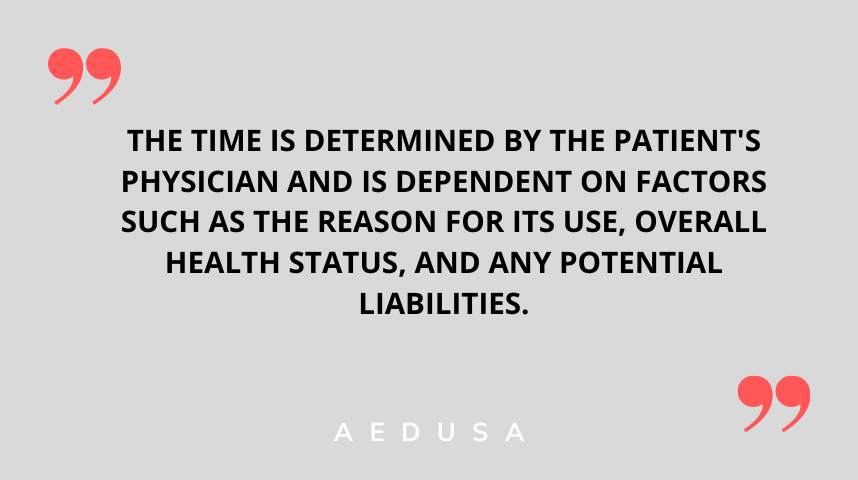 A typical program lasts until the need for anticoagulation therapy with warfarin has stabilized, typically after three months of treatment. However, some patients may require more than three months of LifeVest wear to ensure stability before they are able to stop wearing the device.

What does it feel like to wear a Lifevest?

The LifeVest is worn underneath clothing, so it is not visible. The weight of the vest can be noticeable on some people, but most acclimate to the sensation within a few minutes.

The LifeVest is approved for children over the age of 6, who are typically able to wear it without experiencing any discomfort or side effects. LifeVest is also approved for use in pediatric patients weighing more than 30 kilos (66 pounds).

How much does a LifeVest defibrillator cost?

A LifeVest costs about $2,000. There may be additional costs associated with the fitting of the device and follow-up visits with a healthcare professional.

The wearable cardioverter defibrillator is a lightweight and unobtrusive garment that can save lives. It was designed to help decrease the mortality rate of sudden cardiac arrest (SCA) victims by providing immediate intervention in cases where SCDs are not available or nearby, such as during an airplane flight or while driving on long trips. Get your free consultation today!

Emergency Treatment Used to Restart a Heart in Cardiorespiratory Arrest

Why AEDs are needed in the Construction and Roofing Industries