When most people think of defibrillators, they conjure frightening scenes from television shows and movies, where the Emergency Responder yells, “Clear!”, before jolting electricity through a patient with large paddles.

Those frightening machines of the past have developed, thankfully, into lightweight, portable medical devices called automated external defibrillators (AEDs). They are now accessible to the public and easy for almost anybody to operate. They save many lives today.

Still, however, many people have never heard of an AED and have no knowledge of what they are, what they do, or when they are used. For those who do not know about these lifesaving devices, it is time to learn. One day maybe you will use one to save a life.

The more you know about AEDs and how they work, the more likely you will be to step in confidently and rescue somebody who is experiencing sudden cardiac arrest (SCA). This is important stuff.

What Happens During Cardiac Arrest?

Sudden Cardiac Arrest (SCA) is a condition in which the heart stops beating suddenly and unexpectedly because of ventricular fibrillation (VF), a problem within the heart’s electrical system.

When this happens, blood no longer flows to the brain and the rest of the body, and the victim collapses into an unconscious state. When blood flow ceases, tissue damage 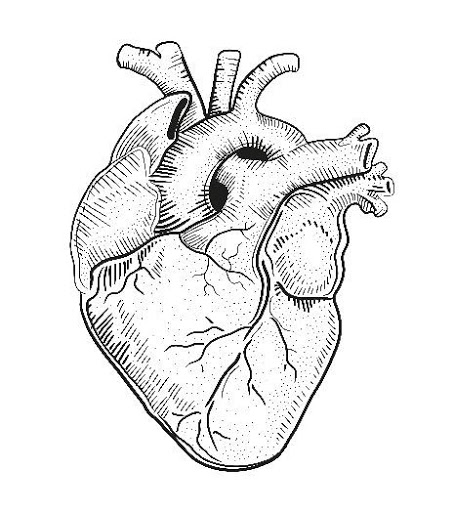 starts to occur shortly afterward, and death follows within minutes without intervention.

The mechanisms behind SCA vary, but they all stem from disruptions in cardiac rhythm. A consistent rhythm of electrical activity guides the heart’s muscles to work in tandem. Disruptions in this behavior, resulting in beats that are irregular, too fast, or too slow, are called arrhythmia.

Left unchecked, arrhythmia leads to ventricular fibrillation (VF), where the heart muscles quiver or flutter instead of contracting in a coordinated manner.

This is where SCA generally begins. It may also manifest in an electrical rhythm that appears normal but fails to produce a pulse, called pulseless electrical activity or electromechanical dissociation. In severe cases, the heart and electrical rhythm stop entirely, which is called asystole or cardiac flatline.

Coronary artery disease, and other structural heart disorders, are responsible for most cases of SCA. Sometimes these conditions are inherited. Regardless, they affect the electrical behavior in the cardiac muscles and increase the risk of arrhythmia.

SCA can also be induced by injury, severe bleeding, poisoning, electrocution, or drowning. Often, there are no warning signs or symptoms before SCA. Sometimes, however, victims experience chest pains, shortness of breath, dizziness, vomiting, and blackouts.

During cardiac arrest, the patient exhibits a lack of regular pulse, leading to loss of breathing and consciousness. Heart attacks are often assumed to be synonymous with cardiac arrest; however, a heart attack (formally, myocardial infarction) entails damage to cardiac muscle because of decreased or halted blood flow to a part of the heart. This isn’t cardiac arrest but can often induce it.

What is a Defibrillator?

A defibrillator is a device intended to treat ventricular fibrillation. To do this, the defibrillator passes a brief electrical current through the heart, which depolarizes cardiac muscle and allows the body’s natural pacemaker to re-establish a proper rhythm.

A pair of electrodes, along with electrically conductive gel, facilitate this current via a difference in potential (or voltage); the gel reduces the natural resistivity of body tissues and prevents electrical burns. Traditional defibrillators electrodes come in the form of metal paddles with insulated handles, while some modern defibrillators instead use adhesive pads with conductive gel already applied.

Several types of defibrillators exist, varying in application. Manual defibrillators—the ones that likely come to mind for most laypeople—require professional training to use properly. Using an electrocardiogram (built-in or separate), the operator diagnoses the heart rhythm present and, if a potentially fatal arrhythmia is found, manually sets the voltage and duration of the shock before applying the electrodes.

Conductive gel is also applied manually before use. Paddle electrodes exist almost exclusively on manual external defibrillators used in hospital settings, often with disposable conductive gel pads. With training, the paddles can be placed and activated quickly, saving precious time in a procedure where every second means further tissue damage.

Automated external defibrillators, however, have set voltages and the capability to diagnose heart rhythms when the electrodes are placed on the victim’s chest. The AED will not administer the shock unless treatable ventricular fibrillation is detected, so the user doesn’t have to be formally trained to recognize a shockable rhythm. Because of this, AEDs are most useful for out-of-hospital cardiac arrests. 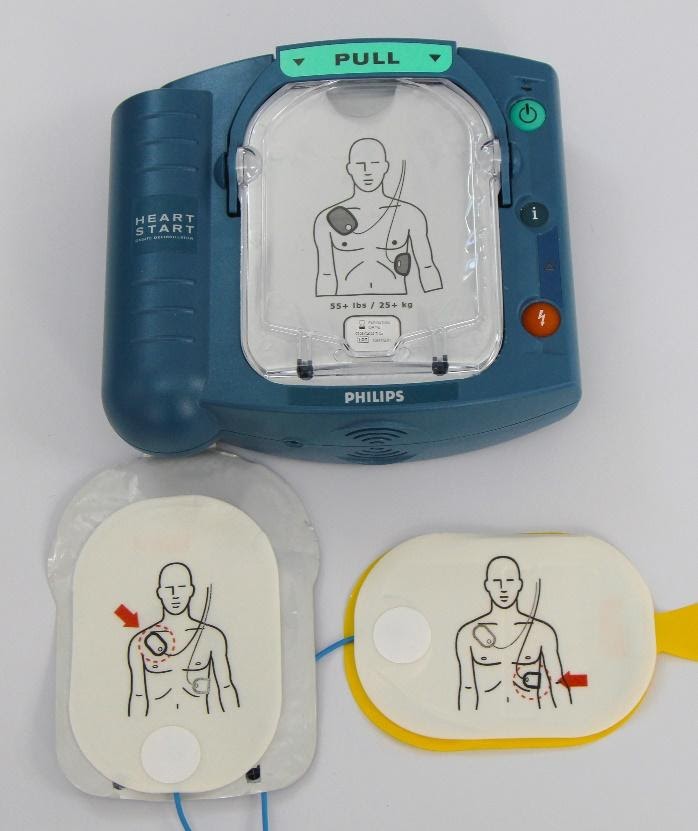 Implantable cardioverter-defibrillators are surgically applied similarly to artificial pacemakers and, like AEDs, are programmed to monitor heart rhythms and detect when intervention is necessary to treat arrhythmia. Wearable models may be used instead for patients who aren’t in immediate need of an ICD.

Though AEDs feature automated functionality and many installed in public locations even guide the user through the process, it’s still important to know how to effectively use them for treating victims as quickly as possible, especially when first responders can take an average of eight to 12 minutes to arrive at the scene.

Training programs for first aid often include instruction on the use of AEDs alongside CPR and other procedures, for those who want hands-on practice.

The procedure of using an AED is as follows:

TV shows and movies are ill-equipped to demonstrate correct defibrillator use and often exaggerate their effectiveness. While defibrillators are invaluable in saving the lives of patients suffering from cardiac arrest, reckless use—or failing to use one when needed—can instead endanger lives.

Some people fail to act when sudden cardiac arrest occurs in public because they believe that medical training is needed to use a defibrillator and misusing one can instead lead to patient death. This is half true, in that manual defibrillators require professional expertise and that administering shocks is dangerous if ventricular fibrillation isn’t confirmed.

AEDs, however, circumvent both issues. They are straightforward for laypeople to use, and AEDs typically do not allow the user to administer a shock if a “shockable” rhythm is not detected. If an AED is available, do not wait for professionals to arrive before acting. A swift response improves the odds of the patient’s recovery.

CPR is just as important as defibrillation in the event of sudden cardiac arrest. Chest compressions can help manually pump blood to deliver oxygen supplied by rescue breathing. This helps to delay tissue death until defibrillation begins, or emergency providers arrive. However, CPR is not a substitute for defibrillation. A defibrillator must still be used as soon as possible to maximize the chance of survival. 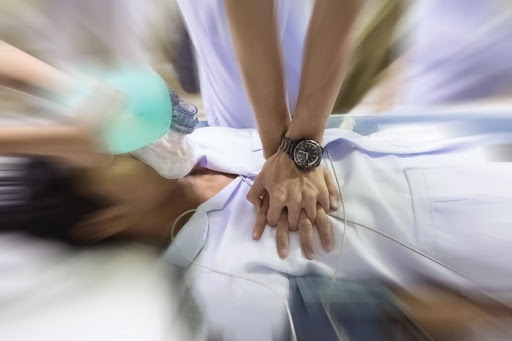 It is critical to note that a defibrillator does not restart a stopped heart. Contrary to common understanding, the heart does not immediately stop during cardiac arrest; usually, ventricular fibrillation takes place first.

The defibrillator’s purpose is to correct this fibrillation by way of interrupting irregular electrical impulses so the natural rhythm can reassert itself. In the event of asystole, there is no electrical differential in the muscle to correct in the first place, and a shock would only cause even more damage.

Similarly, the underlying causes of pulseless electrical activity can’t be treated by defibrillators, as the cardiac muscle fails to pump for reasons unrelated to electrical impulse. In practice, though, AEDs will not let you administer a shock if the heart has flatlined, removing the risk of inadvertently shocking someone who does not need it.

Unfortunately, defibrillators and CPR are not a guaranteed cure. Though they make it possible to survive sudden cardiac arrest if used promptly, some cases require more thorough treatment of underlying causes. Also, tissue damage is still likely, due to loss of oxygen during cardiac arrest. Some patients may have a regular heart rhythm restored, only to fall into a coma or be diagnosed with brain death.

Despite these issues, though, it remains true that defibrillation and CPR give victims of cardiac arrest a chance at survival that they likely wouldn’t have otherwise. New technology, as well as initiatives to encourage first aid training, empowers everyday people with the capability to respond to sudden cardiac arrest and potentially save lives.

How To Use A Defibrillator What Is It And Who Can It Help?

Effects of Sleep Apnea on Heart Disease and Stroke

What Risk Factors Should I Be Mindful of When It Comes to Heart Disease?

How Long Can You Live With A Defibrillator?