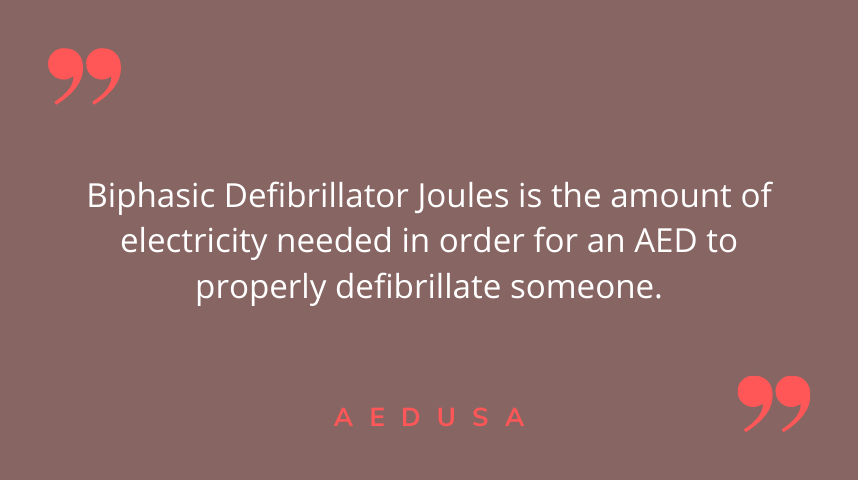 Defibrillation is a procedure used to treat life-threatening conditions affecting the rhythm of the heart. These include cardiac arrhythmia, ventricular fibrillation, and pulseless ventricular tachycardia. Sudden Cardiac Arrest (SCA) is the third leading cause of death in the United States. Education, training, and access to AED’s increase the survival of hospital discharge with victims of SCA.

The treatment for heart shock usually involves an electric surge that shocks the heart muscle, which causes it to depolarise and restores normal function. The machine used to deliver this therapeutic shock to the heart is called a defibrillator. The ultimate goal or positive result from the use of a defibrillator is ultimately survival to hospital discharge. 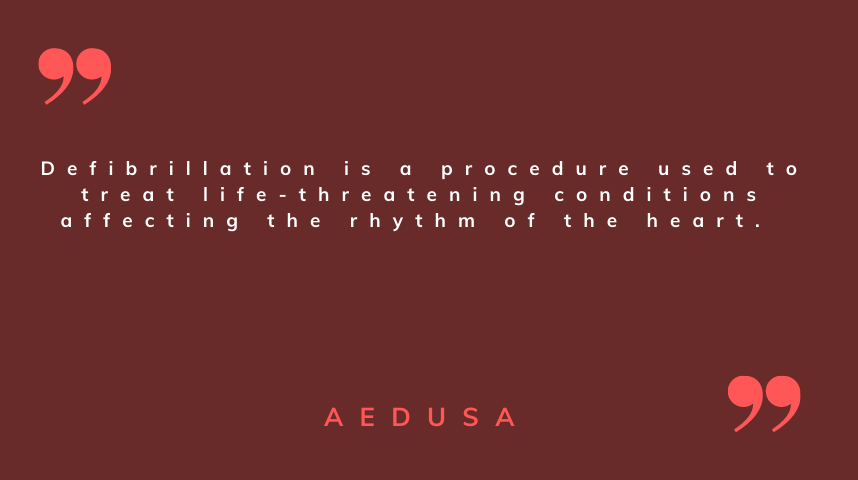 Defibrillator energy is stated in joules. A joule is a measure of work for one amp of current passed through an ohm of resistance for one second.

When we express it in a formula, it is generally stated as follows:

Joules have become a surrogate for current in modern defibrillator language.

Voltage is the current that actually defibrillates the heart. Current is expressed as Voltages/Impedances (resistance)

Resistance to electrical flow within the circuit and in the patient’s body; there is resistance in both. The amount of impedance a patient has can’t be determined with certainty. Specific body measurements like weight, temperature, and slickness are difficult to measure accurately before administering shocks to the defibrillator’s paddles or pads. Impedance is measured in ohms. 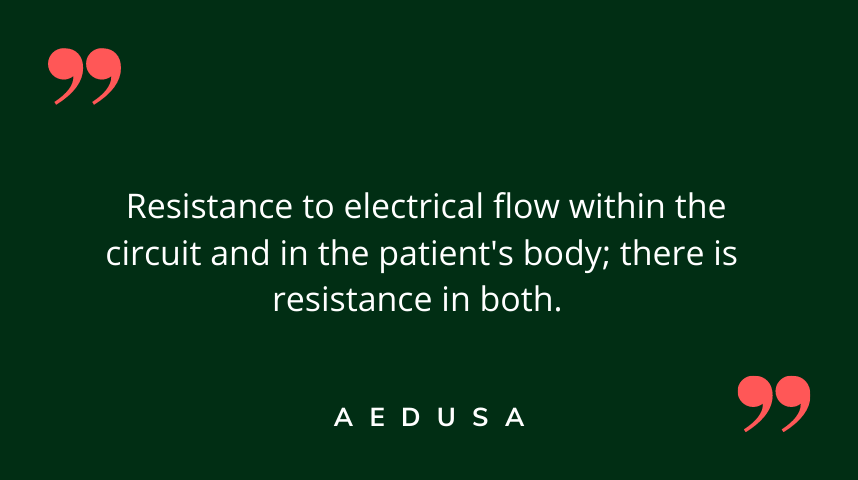 Impedance is the measure of how well a material conducts electricity. Biphasic waveforms have an impedance that is typically less than half the impedance of monophasic delivered ECGs, and thus are able to penetrate deeper into cardiac tissue where they can more effectively reach quiescent cells.

Monophasic Defibrillation Waveforms is defined as a waveform that has only one major pulse of current. Monophasic defibrillators generally have lower joules than biphasic ones. This waveform is stricter than the cardiopulmonary algorithm for a few reasons. The first and most notable reason is that, whereas the cardiopulmonary algorithm adjusts energy output based on patient impedance to ensure maximum performance, this wave doesn’t have that function. 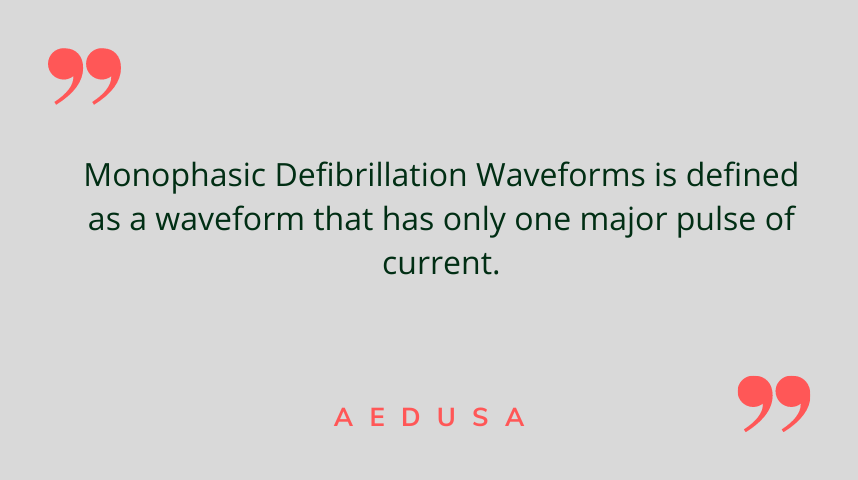 Biphasic defibrillators use current in two directions, not just one. In the first phase, the current moves between two paddles as in monophasic defibrillators. During phase two of biphasic defibrillation, the current flow reverses direction. The underlying mechanisms of biphasic defibrillation are not yet fully understood, but evidence has shown that for many AEDs this waveform can be more effective than standard parameters. The shape of the current’s delivery is determined by the duration of the delivered energy. Animal research has demonstrated that the most effective waveforms maintain their shape and duration regardless of patient impedance. Biphasic waveforms can adjust to changing impedance by altering the characteristics of the electrical impulses. This is intended to ensure that people of all types will have an equal chance for survival if they are experiencing arrhythmias. 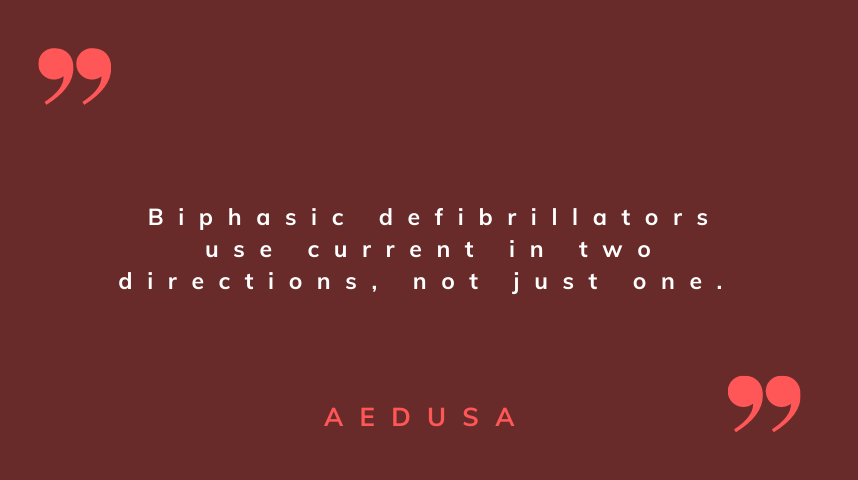 Let’s first start with defining a heart rhythm as a sequence of cardiac electrical activity in the human body. 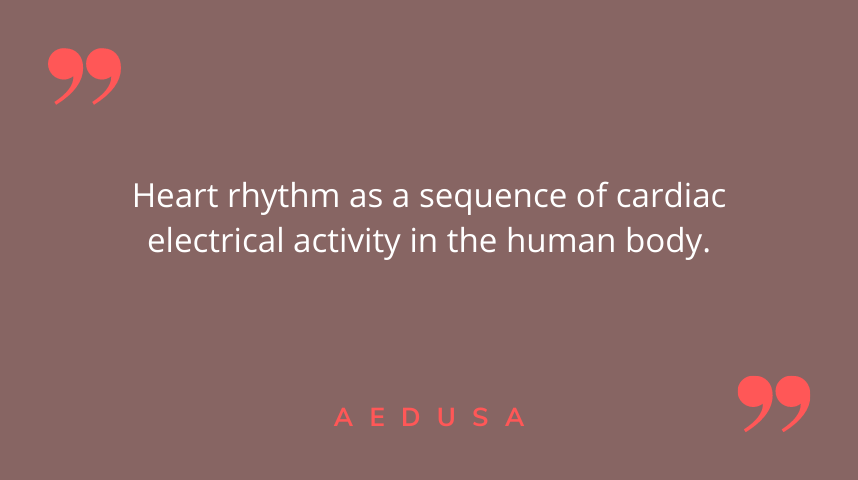 External electrical cardioversion remains the preferred technique for restoring sinus rhythm in patients with persistent atrial fibrillation. These devices use monophasic damp sine waveform shocks. However, it has been shown that a comparable or even higher rate of transthoracic cardioversion can be achieved with biphasic shocks. These studies examined the efficacy of biphasic defibrillators at different doses. Currently, 75% of patients who suffer SVT can be successfully cardioverted with 200 J monophasic shocks. In this study, we compare the efficacy of monophasic and biphasic waveforms to see which is more effective at reversing a person’s heart rhythm.

The therapeutic waveform when delivering joules to an AED is a defined set of electrical characteristics over a defined time, measured in units called electricity. Put simply, the total output of an AED includes voltage (amperage), current (current of electricity), and duration. Each characteristic plays an important and different role in successful defibrillation.

Escalating energy is defined as how fast the current of electricity increases over a period, typically in seconds. Biphasic defibrillators tend to have increased energy that is faster than monophasic and this might be because many patients with ventricular fibrillation have a slow electrical activity called “slow pathway”.

When applied to patients with ventricular fibrillation, it is vital to try and reperfuse the heart as rapidly as possible. To do this we must first apply a shock of biphasic defibrillator joules. This will restart the rhythm of the heart and bring blood flow back to normal levels once again. Ventricular tachycardia (a wide QRS [>120 ms] rhythm without associated P waves, at a heart rate >120 bpm) was uncommon in both treatment groups (ranging from 3 to 6 patients [1.8% to 5.6%] after initial shocks) and it was grouped together with VF. Asystole was defined as having ≤1 QRS complex occurring and an organized rhythm was defined as ≥2 QRS complexes with a rate <120 bpm. The return of spontaneous circulation (ROSC) was defined as the presence of palpations or recorded blood pressure for any duration associated with a normal heart rhythm. Sustained ROSC meant that these two signs persisted until hospital arrival. The study defines the dispatch time as when EMS providers were sent to the scene, and arrival time was defined as the time when providers reached a specific street address.

What is the difference between a monophasic and biphasic defibrillator?

A defibrillator is a device used to shock the heart back into action when it stops contracting due to an abnormal rhythm known as ventricular fibrillation (VF) or tachycardia. The electrodes used to deliver the shock could be either paddles or patches, applied below the left collar bone and at the apex of the heart. 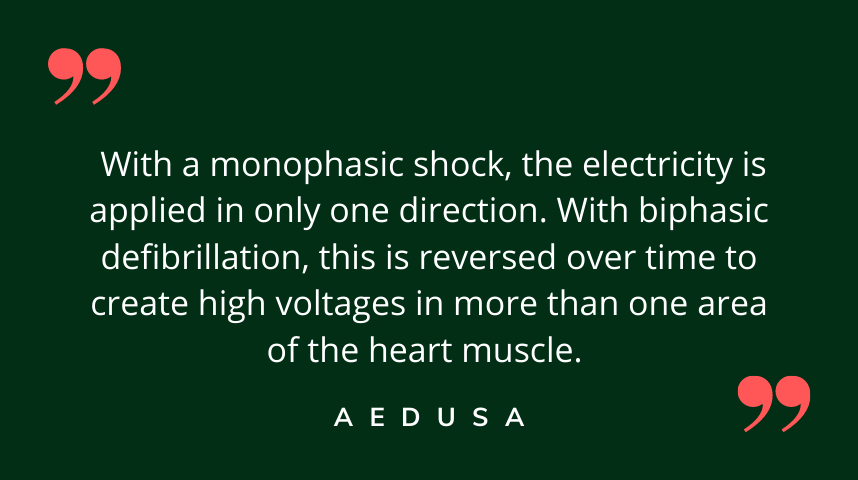 The shock delivered by an AED will be either a monophase or biphasic current. With a monophasic shock, the electricity is applied in only one direction. With biphasic defibrillation, this is reversed over time to create high voltages in more than one area of the heart muscle. The initial defibrillation pulse provides joules of energy that are higher than the reverse polarity application. Defibrillation waveforms are often categorized as biphasic or monophasic in relation to the defibrillator’s output. Biphasic truncated exponential waveform and rectilinear biphasic waveforms are forms of biphasic waves used to power devices, such as automated external defibrillators (AEDs). The defibrillator will sense the increase in resistance to determine how much of its internal energy should be released and how many joules are necessary.

The proposed mechanism for biphasic defibrillators is that the waves work on different types of cells at some distance from one another. Some cells near the electrode receive too much energy as those farther away get too little. Changing the polarity of electrocution helps to sweep these cells off as well. This response is sometimes called a ‘burping’ response.

The prospective randomized evaluation of biphasic versus monophasic waveforms in 22 survivors found that the survival rate was decreased when a patient suffered cardiac arrest during implantation.

After this effect, it can be determined that prolonging the first phase is beneficial and should be investigated for those who suffer from out-of-hospital cardiac arrests. Of the patients, 15 (68%) had a lower defibrillation threshold with biphasic pulses.

The lower energy delivered in biphasic defibrillation could theoretically reduce the potential damage to the muscle tissue by the high voltage shock. This aspect was evaluated by the researchers W Tang, M H Weil, and S Sun [2]. A study found that biphasic waveforms used at 150 Joules exhibited equal effectiveness to conventional monophasic when it came to restoring rhythms. The energy delivered was much lower with biphasic defibrillation and it reduced the severity of post-resuscitation myocardial dysfunction.

However, according to a Cochrane Systematic Review, no evidence was found to show that biphasic defibrillators have an important effect on the success of AEDs.

The American Heart Association recommends that Biphasic defibrillators be used when conventional monophasic devices are not available.

Implanted cardioverter-defibrillator devices are useful in preventing sudden death in patients who suffer from sustained ventricular tachycardia or fibrillation. ICDs have been shown to be an important tool in preventing life-threatening arrhythmias. 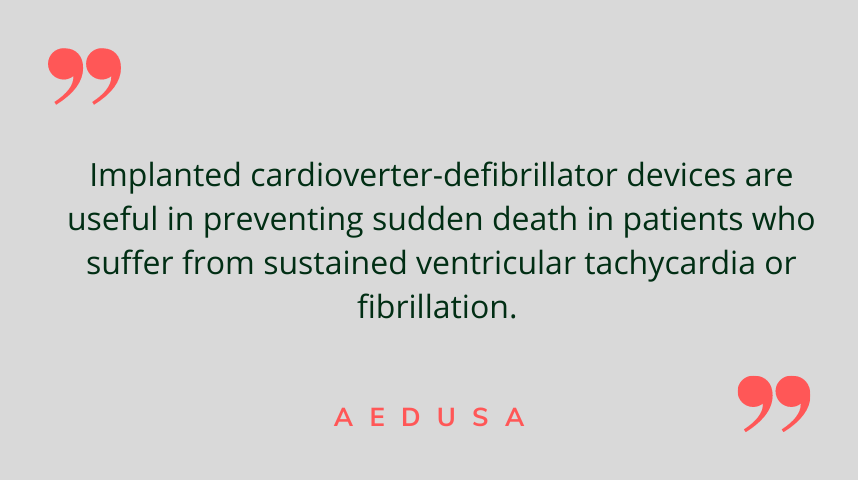 Newer-generation ICDs may have the ability to function as a pacemaker. An electronic pacemaker would detect if the heart rate is too slow and stimulate it to beat.

An implantable cardioverter-defibrillator (ICD) is a battery-powered device placed inside the body, under the skin, or on top of it. It keeps track of your heart rate and can take corrective measures if needed. ICDs have wires that are a lot like those in many other medical devices, connecting the device to your heart. If an unhealthy beat is detected, these ICD devices will deliver an electric shock if needed- but only if you’re having some kind of abnormal irregular heartbeat- and it’s necessary to restore the rhythm.

ICDs have been shown to be helpful in preventing sudden death in patients with sustained ventricular tachycardia or fibrillation. They may also help prevent cardiac arrest for those who are at risk but haven’t had an event yet.

With the recent increase in sudden cardiac arrest victims, it is important to know what Biphasic Defibrillator Joules are and how they affect the efficacy of sudden cardiac arrest patients. Through our research, we have found that biphasic defibrillation can be a better alternative and why most AED manufacturers have turned to it with their devices. If you want more information about how we treat Sudden Cardiac Arrest Patients with Biphasic Defibrillation please contact us today. Our team will gladly answer any questions you may have!

FAQs Related to COVID-19 and CPR Training and Performance

A Brief History of the Defibrillator

Effects of Sleep Apnea on Heart Disease and Stroke

Can A Defibrillator Restart A Stopped Heart? | AED USA